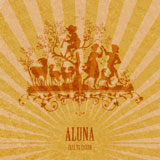 If the only musical legacy the West Midlands ever left us was Black Sabbath they’d be doing pretty well in my book. The fact that they’ve also given us Judas Priest and half of Led Zeppelin means that their hard rocking credentials are firmly in place. It’s nice to see that there are bands still coming through aiming to take the last 40 years worth of sounds and drag them forward and Aluna are one of the bands currently spearheading this charge along with Sonic Lord, Godsize and I Am Colossus.

This is kind of hard to describe. Imagine St Vitus with a dose of female hormones, or imagine a less shit version of Jefferson Airplane with more testosterone. Musically this takes the tried and tested doom formula of St Vitus and shoots it through with a knowing pop suss. Opening track “Spend My Time” tips a heavy handed nod towards old school glam like T Rex or Gary Glitter (before paedophilia became illegal), while “Son Et Lumiere” treads a more familiar doom path before running off with some stop-start boogie riffing. Final track “Show Me How” brings the pace back up with its anthemic crunch. Dave Day, also the riffmeister behind Sonic Lord, allows his more melodic side to shine through to huge effect. As with Sonic Lord the riffs are simple yet catchier than herpes in a Thai brothel. The real ace in the pack here are the vocals of Soph Willets. Admittedly these may be an acquired taste initially and have and will continue to divide opinion about the band. Anyone expecting a throaty Wino style roar or some Janis Joplin style guts may be disappointed as Soph counters the weight of the music with a laid back croon that brings to mind the mellow vibes of late 60’s West Coat psychedelia. On paper this may not look great but in the CD player this works. The blend of two disparate styles from the same era is a masterstroke…the Sabbath sound effectively killed the hippy dippy ethos but Aluna grab both and slam them together to create something fresh. What Soph may lack in balls out power she more than makes up for with a keen ear for a top melody. Get over your initial prejudices about her style and spin this a few times and you’ll be singing the yeah yeah parts of “Spend My Time” before you know it.

Aluna’s demo was dogged by a weak production that particularly affected the drums but I’m glad to say that this obstacle has been overcome this time round with a nice weight. My only slight criticism, and this may be at odds with what I’ve just been saying about the vocals, is that they are a little high and dry in the mix. I would have liked to have heard them backed off a little and sitting in with the music rather than on top of it but this is a minor criticism and certainly not a deal breaker.

Not only have Catacomb pulled off another top notch release but Nasoni Records in Germany will also be issuing this on 10″ vinyl with a soon to be recorded bonus track…you lucky lucky bastards!!!