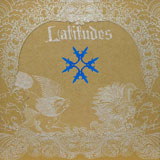 Joining the elite cabal of Alexander Tucker, Daniel O’Sullivan and Josh Graham in having the honour of being invited back into the Latitudes fold, Nadja’s Aidan Baker is joined by London psych-drone ensemble Plurals for his second Latitudes session. Whilst the two halves of this record are conflicting in tone, the gentle shimmer of ‘Dead Foxes In The Street’ is a more pleasant and ultimately enlightening experience than ‘Turning Children Into Mice’ depressive mantra, both share that hallmark of Baker’s work: a deeply haunting and meditative air that provides a draw inescapable to anyone short of the Buddha himself.

‘Dead Foxes…’ is a slow burner even by Baker’s standards, a 20-minute twilit ritual that emerges from nothing into the barest essence of sound. Piercing the wall of echoing drone they gradually construct, layer by layer, a twinkling ambience and subtle sweeps of sound like the life of a beast returning to consciousness after a winter of deep sleep, both minute yet gradually overwhelming. It seems that Plurals have roused something in Baker as the longer they persist in their journey, the denser and more claustrophobic their sound becomes. Only Baker’s typically light touch and careful decoration of soundspace prevent latter progressions from simply swallowing the listener whole, the addition of woodwind and a throaty, shamanistic drone instead swelling to orgiastic levels whilst remaining pleasurable and ultimately fulfilling.

What goes up must come down, though, and ‘Turning Children Into Mice’ is this album’s Percocet nosedive. Working around a single, mesmeric riff that strikes a liturgical resonance, it provides a lifeline to desperately cling to as the senses are assaulted by strained, screaming strings and a whisper of white noise that rises and disappears with tidal regularity, swelling and building until it’s a deluge that only the grip on that core riff can stand against. It’s this second track that provides the weight of the album’s impact, its migratory nature providing ample space for the collective to stretch their imaginations, transferring emphasis from drone to melody to texture in every possible combination and shifting the tone from psychogeographical journeying to an expansive, malevolent fog last seen engulfing Silent Hill.

As with every Latitudes session, this has the feel of a natural phenomenon, the end result of artists working without any hindrance or external restraint yet paying the utmost attention to their innate instincts. It ignores structure and focuses solely on providing an atmosphere that envelopes the listener and immerses them in a world that is completely alien to the majority of humanity yet one that feels right, a primal home for the senses shaped from guitar, bells and haunting intent, making it not only a worthy addition to Baker’s extensive catalogue but also to the Latitudes series as a whole. Considering the calibre of the series, perhaps this is the bigger achievement.