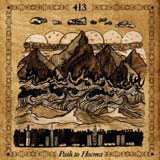 Not 666 or 999 or 123. These Iberian noiseniks have chosen 413. Could it be the international dialling code for Spain? (It’s not – I checked and it’s +34). Or maybe it’s the number of strings broken by the guitarist in the last two years. 413 come from Valencia, and appear to consist of a collective of rather adept musicians who can turn their hands to all manner of musical instruments. I so wanted 413 to be a great band. I think Spain (such a fine country), out of all the grand Euro-nations, needs a truly great band. Those bands may well still have to be Eight Hands for Kali and Lords of Bukkake, who come the closest from what I’ve heard.

Album opener ‘The Town’ is the kind of straining flamenco-tinged post-hardcore that 413 do very well. In fact, 413 do quite a variety of sub-genres very well indeed. To some, this may well be their strength. I’m afraid for me, it is their profound weakness. Speaking as an experienced and serious consumer of music (not too arrogant), there is everything and yet nothing going on here. The whole album veers from the usual generic post-rock angst that could be Isis or Pelican; to meandering acoustic-experimental noodlings with percussion and guitar that morph into an orchestral film score with strings, that reminds this reviewer of a mash of Calexico, Tortoise, Ennio Morricone and 1960s Miles Davis; to all-out math-rock hardcore with screaming vocals and juddering tempo changes that evokes outfits such as Botch and Zu. I wish they would just stick to the noise and not feel the over reaching need to branch out into bloody soundtracks and pop music.

What makes me slightly shudder is 413’s all too frequent use of clean and ‘angelic’ vocal arrangements that cut-in sharply above the music. To my ears this makes the music sound far too compromised by a needless concession to a sweet ‘pop’ or ‘indie’ feel. In fact it downright erodes the credibility of their experimental force and vigour with a simpering overlay of lame sugar-coated accessibility. I reckon they may be trying to sound ethereal and psychedelic, but I think they fall very wide of the mark here. Sounds too ‘square’ to me, and I’m sure it will put off many other listeners who like their noise-rock and hardcore and metal. Sorry 413, but I think you need to concentrate on the heaviness, noise and the experimentation, something you can do well, and just plain ditch the clean vocals (and the orchestral soundscapes). There are some attractive noises and directions in this album, but ultimately, I don’t really know what kind of audience 413 are going to appeal to. Adios amigos.