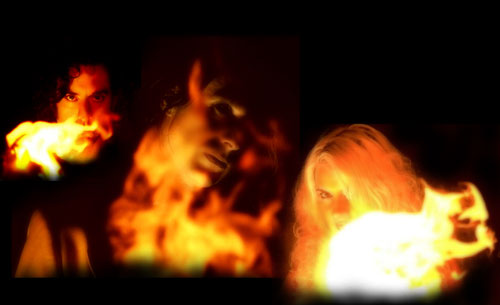 Glitter Glamour Atrocity is a snapshot of WHITE HILLS in the midst of an incredible burst of creativity, and was recorded during the same sessions that produced Heads On Fire and Abstractions & Mutations. Sonically, it is radically different from anything else coming out of the New York underground at the time, and it set the template for the singular concoction of heavy psychedelic music, krautrock, and a worship of pure sound they have explored in different variations ever since. Throughout the album the band explores themes of greed, misinformation, war, hypocrisy and their outcomes within the world’s political and economic systems, presenting these weighty topics with the same air of mystic understanding that underpins their music. Glitter Glamour Atrocity includes the song Under Skin Or By Name, the longest running staple in the band’s live set, which the band performed in the acclaimed film Only Lovers Left Alive at the request of director Jim Jarmusch. It is one of only two performances in the movie, which is enamored with the music making process and record collector culture.

Following the mood-setting intro track and the meditative bombast of Under Skin Or By Name, WHITE HILLS settle into the sparse groove of Spirit Of Exile, an expression of a desire to live apart from a culture that one does not fit into. These songs glow with the burning vitality and passion of free thinkers trapped in the waning years of the Bush administration. Those sentiments are perhaps most compellingly expressed on Love Serve Remember, a warped, surreal vision of life after 9/11 seen through the eyes of someone who witnessed the event first-hand, interspersed with a brilliantly edited speech by Bush himself in which he admits “I was a threat to the United States.” 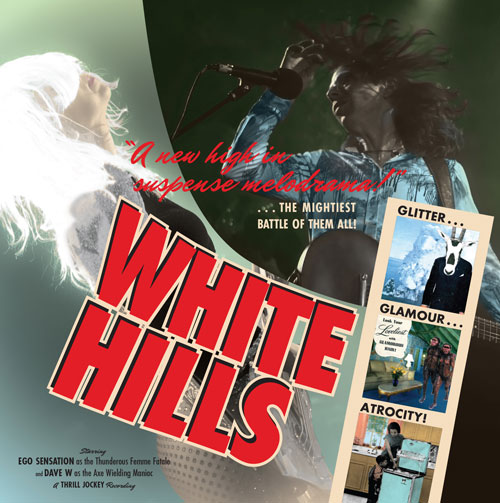 WHITE HILLS will also be hitting the roads of Europe once again throughout September, its starts on 5th at the Oslo Psych Fest in Norway and finishes on the 27th at Liverpool International Festival Of Psychedelia, the full schedule is as follows:

Glitter Glamour Atrocity will be reissued on 25th August via Thrill Jockey Records and will be available on CD, LP and Digital formats.