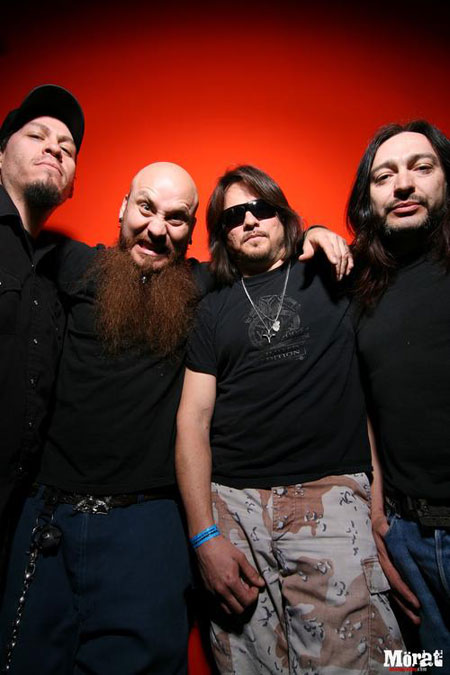 You certainly didn’t see that coming did you!! Well, it’s true. Not only have DesertFest already reunited both the mighty Dozer and Lowrider for 2013, but we are now proud to announce that desert rock royalty UNIDA are Camden-bound this coming April to headline Desertfest 2013.

I’m sure you all already know the story, but that isn’t going to stop it being told over again… Upon the dissolution of Kyuss and Slo Burn, the voice of the Californian sands John Garcia (vocals) hooked up with Dave Dinsmore (bass), Arthur Seay (guitar) and Miguel Cancino (drums) to add their biker punk-metal rhythms to his unmistakable, paint-stripping bluesy grooves behind the mic. Despite huge early promise, a glorious debut album in 1999’s ‘Coping with the Urban Coyote’, a storming split with Swedes Dozer and a follow-up record due with American Recordings in 2001, the band stalled and sank back behind the cacti’ shadows. The long-awaited second album, reportedly entitled ‘The Great Divide’, was never released; Dinsmore left the band to be replaced initially by Scott Reeder and then later Eddie Plascencia whilst Garcia concentrated more exclusively on his new band Hermano and some solo work. Unida was certainly left in-need-a’ something… until now!

Back to blow us all away with the likes of ‘Wet Pussycat’, ‘Human Tornado’ and ‘Black Woman’ plus a whole lot more, this is one pick-up truck full of hulking riffs, fuzzed up overdrive and classic vocal majestics that you simply can’t afford to miss. Get ready to cope with the triumphant return of the urban coyotes themselves at DesertFest 2013!