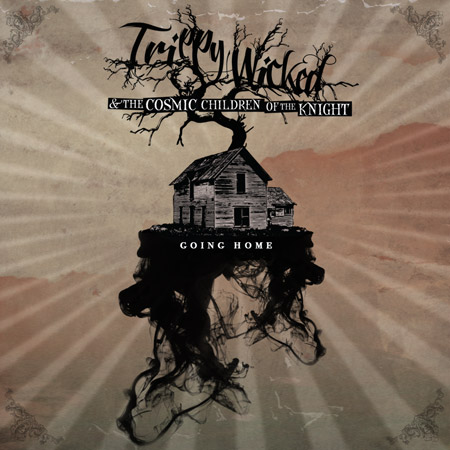 Following a successful string of European dates, this week sees the release of ‘Going Home’ the latest album from Trippy Wicked and the Cosmic Children of the Knight. The nine-track, genre-spanning album is released via Superhot Records.

The band enlisted the skills of uber-producer, Tony Reed – who counts the latest St Vitus album among his credits – to mix and master the album which was recorded in 2011. The resulting album gives a firm nod to heavy influences such as Black Sabbath and Kyuss, but is thickly layered with their own identity and imagination.

Drummer, Chris West commented “The path from Movin On to Going Home was neither straight nor easy and the inspiration for the songs came from some serious highs and lows. That first listen through when we had the mastered LP in our hands confirmed everything we’ve been through was worth it. It was absolute bliss. Working with Tony on the records was a blast. We knew him personally, he knew our vibe from touring together and it was like finding the missing piece of the puzzle. Now we can’t wait for people to hear Going Home and continuing this crazy journey with us.”

Now stream the video below for the track ‘Up The Stakes‘.

For more information about Trippy Wicked visit http://www.trippywicked.com and sign up to their newsletter at http://trippywicked.fanbridge.com.