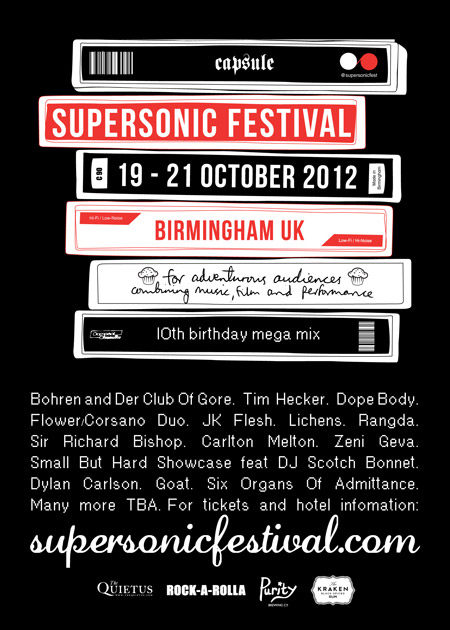 For one weekend each year Digbeth’s arches vibrate with strange, wonderful sounds as the Custard Factory becomes the focal point for one of the UK’s most distinctive and respected music festivals…Supersonic Festival.

2012 marks the ten year anniversary of this dynamic, constantly challenging, experimental, multi-disciplinary arts festival, which identifies the otherwise indescribable connections between experimental music, art, performance and film. To commemorate this impressive and very special milestone this year, Capsule propose to work with Supersonic alumni and emerging artists to celebrate the achievements of the festival thus far whilst also focusing firmly on the contemporary. Because as well as giving a warm welcome to many influential, era-defining artists over the years, Supersonic always has an uncanny knack for highlighting new acts before everyone else is talking about them.

As ever, Capsule‘s programme has a sense of spectacle at the very heart of it, always aiming to capture the imagination of the audience, and with a friendly, bustling atmosphere to boot, there is little wonder why the festival draws fans, artists and industry folks from across the globe.

As part of the initial announcement, Supersonic proudly present our first wave of artists confirmed for the festival and these include; Tim Hecker, JK Flesh, Dylan Carlson, Dope Body, Six Organs Of Admittance, Bohren & Der Club Of Gore, Flower/Corsano Duo, Carlton Melton, Goat, Lichens, Zeni Geva, Rangda and the Small But Hard Showcase (see more detailed information about each below)…with many more exciting additions to be announced over the coming months. Watch this space for some very special announcements also…

Here is the expanded information about each artist (in alphabetical order)

Bohren & Der Club of Gore
If you enjoy it slow and low, Germany’s Bohren & Der Club Of Gore will very likely do the trick. In fact, with each subsequent release the German quartet’s music grows increasingly refined. Playing together since 1988, that band hint at doom, jazz, drone and contemporary classical with an unparalleled restrain. Live shows are few and far between. We are honoured to host them at Supersonic Festival 2012.
http://www.bohrenundderclubofgore.de

Carlton Melton
If you prefer old SST label cassette tapes or an early Spaceman 3 cassette you recently found wedged in the back seat of your car to super slick modern day music production, you may dig Carlton Melton. Their music is recorded live inside a geodesic dome, and is entirely improvised.
http://carltonmeltonmusic.com

Dope Body
Primal hardcore thrash vibes from the lovely brothers of Baltimore. Dope Body are road doggies, funsters, and gleeful pummellers of basement and attic parties alike, wide-eyed fanatics of the craft that the more reasonable among us might mistake for insanity (it isn’t entirely so). Dope Body is a spasm of styles and directions, showering sparks from a half-melted thickness. They writhe under their own influences and experiments, swinging and swaying from guttural chugging to charming riffs n licks within the confines of a single tune. Promoting their brand new album, Natural History, Dope Body are in possession of what might be their most COMMERCIALLY ACCESSIBLE album ever – especially if your idea of “commercially accessible” is Half- Machine Lips Moves/Psychic, Powerless…/or “Salad Days”-era punk. They have well and truly honed their own off-kilter sound, replete with heavy walls of rhythm, raw electronics and vocals that grunt and yelp with an animalistic ferocity. Lock up your daughters, your boyfriends, your kids – keep your own body in check – no one body’s the same, but everybody’s body is sure to get weird when it comes into contact with Dope Body!
http://www.dragcity.com/artists/dope-body

Dylan Carlson
Legendary Earth guitarist Dylan Carlson recently set out to pursue a solo endeavour, up to now he has released a cassette as drcarlsonalbion but there still remains an air of mystery and much anticipation as to what direction this solo musical endeavour will go next. For Supersonic, he will be teaming up with a number of other musicians including Teresa Colamonaco on vocals, Michael York on bagpipes, and Rogier Small on snare drum.
http://drcarlsonalbion.wordpress.com

Flower/Corsano
As a powerful and loud guitar/drum duo, Lightning Bolt comparisons come cheap….the Flower-Corsano Duo are something else – more like a white-punk-jazz-trash Konono No.1 or an Eastern sound, opiate-fixated Harry Pussy. As a duo they have that special power to elevate through noise, rhythm and primal harmonix. An exhilarating sight/sound that shudders the body and cleanses the mind. Obsessive stuff.
http://www.cor-sano.com

Goat
A collective who hail from a small and very remote village in deepest, darkest Sweden, Goat produce heavy, afro psych punk, with absorbing percussion. Old tales of voodoo and curses from their village Korpolombolo inspires their music. One to watch!
http://goatsweden.blogspot.co.uk

JK Flesh
Godflesh, Head of David, Napalm Death, Techno Animal, Jesu, Greymachine, Palesketcher – just some of the projects from the insanely prolific Justin Broadrick, who in his new relationship with 3by3, raises his Techno Animal moniker JK Flesh from the dead for it’s debut full-length outing, to once again prove his mastery of all things brutal. Soul-crushingly dark beats and bass, layered with Broadrick’s inimitable guitar and vocal fuzz, providing a stark contrast to 2010’s Palesketcher output, that will resonate with fans of Godflesh and the post-dubstep landscape alike.
http://justinkbroadrick.blogspot.com

Rangda
Rangda, the child-eating demon queen of Balinese mythology, finds a sonic voice via the epic, thrashing jammerisms of  Sir Richard Bishop, Ben Chasny, and Chris Corsano. A twin virtuoso guitar attack is matched by one of the most in demand drummers in the world. Live, they are utterly thrilling, and a rare opportunity to witness such important players in avant garde contemporary music playing together.
http://www.myspace.com/calonarang

Sir Richard Bishop
Richard Bishop is an improviser, composer, and an intrepid explorer on electric and acoustic guitar whose work often reflects the shadow worlds of India, the Middle East, North Africa, and other points along the Gypsy trail. There is also a fair amount of experimentation involved in much of his string-work which can lead to audio realms rarely visited by others. Attentive listeners may hear shades of Jimmy Page, Django Reinhardt, Sonny Sharrock, and Ali Akbar Khan in his playing. Others may hear the sounds of a train wreck or a swarm of bees flying into a buzz saw (it depends on the day). It hardly matters. Bishop has fused all of these and many other elements to forge a unique and inventive style all his own.
http://www.sirrichardbishop.net/bio.htm

Six Organs Of Admittance
Six Organs of Admittance is the primary musical project of guitarist Ben Chasny, ” the architect of one of America’s best-ever psychedelic syndicates” – Pitchfork.
http://www.sixorgans.com

Small But Hard showcase
Promoting exciting new label Small But Hard with exciting artists, including…
Koyxeи is one of the many aliases of Kouhei Matsunaga, when in his Hip Hop/Breakbeat guise with vocalists & MCs.
C_C – after listening to a lot of jungle, dub and breakcore, Eduardo Ribuyo had his brains blown when he met NHK, aka Kouhei Matsunaga. The ensuing metamorphosis brought us C_C, master of handmade beats and analogue feedback loops. Taking k7 tapes as his primary material, and sourcing sounds from anything and everything, C_C produces heavily textured music breathing, repetitious, and deep. Live performances envelop, soupy and treacly, moving incognito through his signature improvised flow.
Devilman comprises of three strong individual talents, Shige (DJ Scotch Egg) on bass, Gorgonn (Dokkebi Q) live mixing, and Taigen Kawabe (Bo Ningen) providing vocals. They are part of a secret underground organisation fronted by the mysterious MR. D.
DJ Scotch Bonnet is the new solo project of Shigeru Ishihara, aka DJ Scotch Egg. A maverick, crazed with energy and excess creativity, Ishihara’s chance meeting with Matsunaga Kouhei spurred an isotopic explosion of activity and inspiration; the result was new dope style distorted bass and beats
Kakawaka makes noise. The lunatic who took over the asylum, Kawakawa merrily blends childish tomfoolery with mind mangling noise. Abrasive sound sculptures beat you into submission until you are sick on the carpet. He spits in your eye and pisses on your face. For thus it is written in the great journal of musical endeavour that someone somewhere will achieve maximum joy from this unholy racket.
http://www.small-but-hard.com/

Tim Hecker
Canadian based composer and sound artist, Tim Hecker has spent the last decade inhabiting a unique intersection between noise, dissonance, and melody. In his varied and celebrated works, digital and organic sources tightly intertwine. The immense power and menace of his live shows make Hecker a contemporary master of volume and texture.
http://www.sunblind.net/