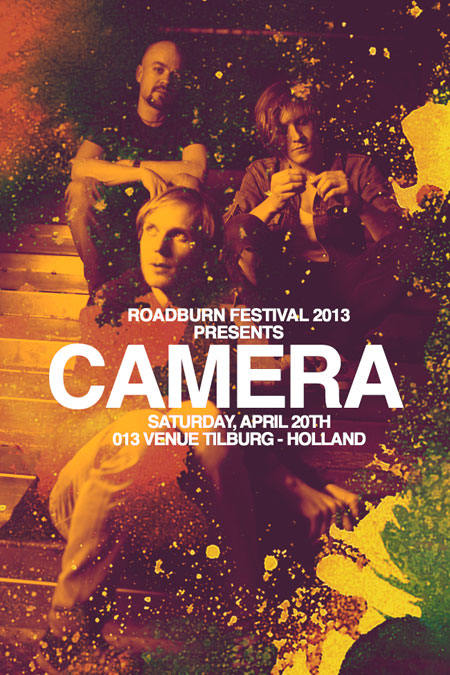 Roadburn are thrilled to announce that Berlin’s very own Camera will bring their neo-krautrock antics to Roadburn Festival 2013 on Saturday, April 20th at the 013 venue in Tilburg, Holland.

Using clever guerilla tactics, the trio has taken Krautrock to the streets, making the magical achievements of German musical pioneers accessible to a wider audience. So far, more people have probably seen Camera live for the first time in a subway station in the middle of the night, or an underpass, or even a public restroom, as opposed to a conventional concert venue.

Camera loves to perform spontaneous and entirely unauthorized concerts in public spaces (to get an idea, check out the YouTube clips below). The trio set up their bare bones drum kit (snare, floor tom, cymbals and headless tambourine) and two amplifiers, plug in their guitars and synthesizer and off they go.

Camera’s vast musical topography includes lush valleys and foreboding ridges, crisscrossed with trails blazed by the likes of NEU!, Harmonia, Cluster and La Düsseldorf. Their sound can be right in your face with hard-driving motorik rock or somewhere way out in space.

The band’s debut album Radiate easily ranks amongst the finest releases of 2012 and successfully manages to capture their spontaneity within the confines of the studio, hitting a genuine Krautrock nerve. The audio quality is more or less the only clue that Radiate was not recorded at one of the band’s thrilling gigs.

We look forward to welcoming them to Roadburn Festival 2013.