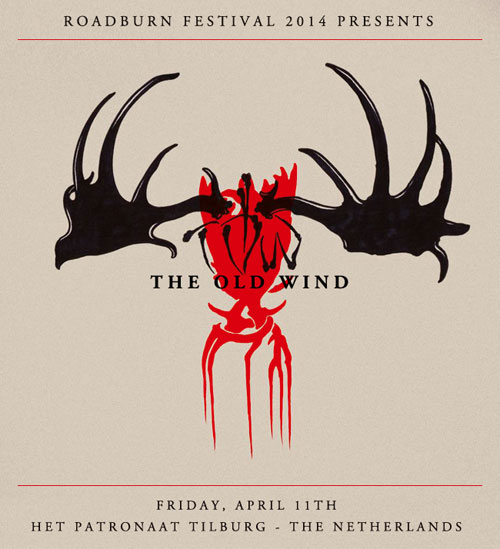 The Old Wind , featuring not only Tomas Liljedahl of legendary Swedish cult noise crew Breach but also The Ocean‘s Robin Staps, will bring their primal post-sludge / hardcore, as savagely captured on the band’s massive debut album Feast On Your Gone to Roadburn Festival 2014 on Friday, April 11th at Het Patronaat in Tilburg, The Netherlands.

“Tomas Liljedahl may or may not be familiar to some of you here but if not he was the former vocalist for legendary post hardcore act Breach but has been away from the live scene dealing with some demons, something we all know about I guess.

Those years of darkness has certainly fuelled the creative juices within Tomas as this album has been done entirely by the man himself and was originally envisioned as a purely studio outfit but with the addition of two other former members of Breach (Niklas Quintana and Kristian Andersson), Karl Daniel Lidén on drums and Robin Staps on guitar the TOW is a fully fledged live band and these tunes certainly need to be heard live.

There is a primal, savageness about “Feast On Your Gone” which given its rather intriguing title I have completely interpreted in my own way through my own personal inner demons and issues and believe me this is an album that is unafraid to yank hard at those emotive strings with sizeable force and threaten to tear you apart. Noticeably on the opener “In Fields” the vocals are so venomous you feel like you need to check for some sort of vitriolic liquid running down your brow.

This album also has a triple guitar attack not unlike Cult Of Luna which is a fair enough comparison but I’d say this is far more hate filled than said compatriots. As “In Fields” progresses sludge tendencies are felt with the slowness of the music but post hardcore primeval animalism is at its beating stone heart.

“I’m Dead” utilises throat shredding barbarity with the slow dirge like and sorrowful music, with the bass creating mini aural implosions inside your already fragile head even after two songs. The music is crushing, truly crushing on “Raveneye” but not without a sense of melody set against the repeating beats that actually had me think of mid era The Ocean with the pulverising head caving intensity.

With the vocals being so harsh and face peeling it could be quite easy to lose sight of, or should that be ear of, the omnipresent guitar work which with its multi-layering technique is teeming with boundless prolificacy. I cannot understate how good the guitar work is and live this is going to be on a par with Cult Of Luna and The Ocean”– Martin Harris / Ave Noctum.