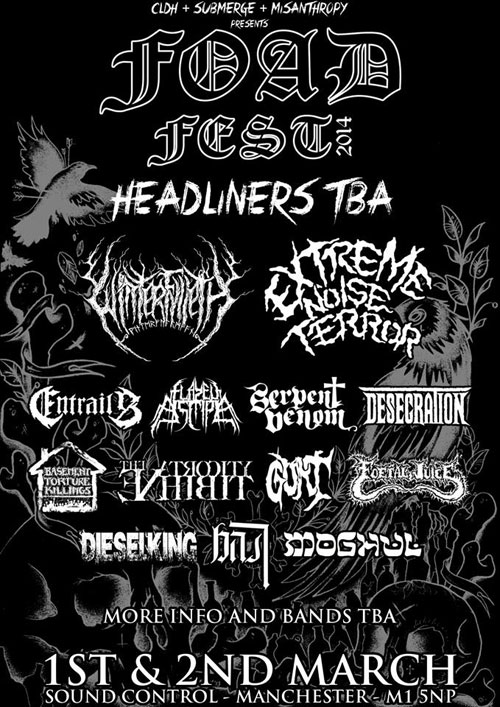 FOAD Fest will be a 2 day festival which will take place in central Manchester over the 1st and 2nd of March 2014. The event will be hosted in the multi floor venue, Sound Control, and will feature over 30 bands from across the whole metal spectrum.

The venue is easy to find- situated right next to Oxford Road train station and has a whole plethora of hotels, bars and restaurants to invade.

Manchester has long deserved a festival like this and the crew behind the festival are very happy to be delivering it. The hope is to provide Manchester with an annual festival which not only showcases the best local bands but can also provide hospitality to awesome international bands.

Already confirmed so far are Black Metal stalwarts WINTERFYLLETH who will bring their epic evocative styling’s to the FOAD stage, having stunned crowds across the globe at festivals such as Roadburn, Hellfest and Grasspop, it is an honour to have the Local crew perform on their home soil.

WINTERFYLLETH Drummer Simon Lucas had this to say about performing at the first FOAD Fest: “We are extremely pleased to be playing FOAD-fest, this rather interesting new event that is taking place in Manchester. There’s some absolutely great bands already on the bill and there are some brilliant artists yet to be announced. It will be our first Mancunian show in a year and we will be sure to bring the atmospheres of rural England and ancient Britain to the heart of Manchester.”

Also included on the bill are Crust/grind legends EXTREME NOISE TERROR, who have been leaving various venues and audiences destroyed in the wake of their energetic live performances since their inception in 1985.

With Headliners and many more bands to be announced, FOAD Fest is looking to be an extremely messy weekend with some amazing music and they can’t wait to unleash carnage on our streets . More Information and ticket prices to follow.

GHOST B.C. Stream Entire New EP ‘If You Have Ghost’ At Roadburn.com