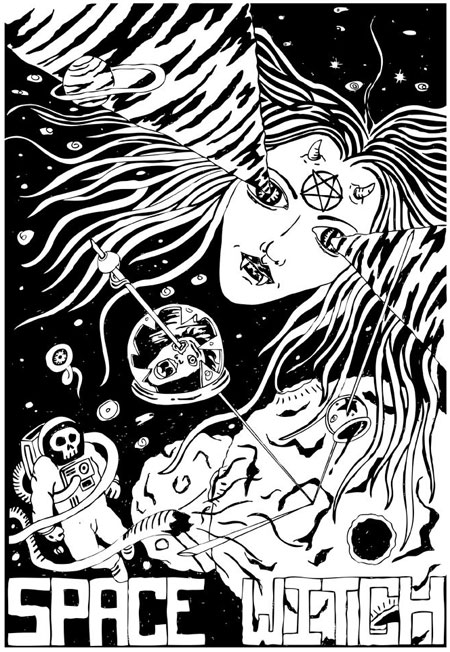 Stoke-on-Trent based Cosmic Doomers SPACE WITCH are back from their hiatus with a new EP ‘The Alchemy Paradox’ which is set to be released on limited Cassette and Digital formats via Cosmic Tomb on the 30th April 2013.

‘The Alchemy Paradox’ is a 30 minute DIY release of instrumental postdoom. It was recorded DIY style (badly with minimal recording equipment – warts an all) by the band at Star Trak Studios, Stoke-on-Trent on January the 28th/29th 2013 and captures the bands sound at their rawest form as a trio. The EP was mixed and mastered by Nathan and Tom at The Universal Thrift Club Music Studio, Stoke-on-Trent.

1. Hang the Witch (12:57)
A piece that reflects the journey of emotions going through a long term relationship breakdown. Chaos, loneliness and acceptance.

2. Cosmic Cauldron (13:45)
An old school track that has grown since its inception. The exploration of time, all things funeral and slushiness. The span of life reaching its eventual conclusion a fixed point in time.

3. Black Pyramid (06:08)
The realisation that our lives are controlled by a structure put into place well before our time. Religion, Governments and Credit Systems that fix our boundaries in life. Denial, realisation and then avoidance.

Read on for more info about the band…

SPACE WITCH are an instrumental post-doom trio from the rotten kilns of Stoke-on-Trent. They take influence from their surroundings and experiences writing minimalist and repetitive drawn out tracks incorporating the feelings and expression of topics faced in life. Their musical influences include a wide range of contemporary and off-the-wall styles including many underground and major bands/artists.

Originally formed in 2007 with members from the Stoke collective of musicians based at Star Trak Studios and saw their first shows and 2 track demo in 2008 sharing the stage with the likes of “Rise to Thunder”, “The Sontaran Experiment”, “Humanfly”, “Lazarus Blackstar”, “Charger” and “Firebird”.

2009 saw the start of a 2 year hiatus and at the end of it a major lineup change. They became active again locally and spread their wings further a field to Bristol, supporting bands such as “Saviours”, “Cernunnos” and “Mother of Six”. In 2012 the band experienced another major lineup change after a failed merger with the doom-fusion band “The Weird Head”.

With a new lineup and a new set of songs the band continued to play in and outside of the area playing with the likes of “Opium Lord”, “Trollkraftt” and “Grimpen Mire”. The current SPACE WITCH lineup is:

2013 will see their first label supported release and a number one off shows around the UK. The band are currently recruiting an additional guitarist and an electronics operator to return to the roots of experimentation, interested parties should not hesitate to get in touch!