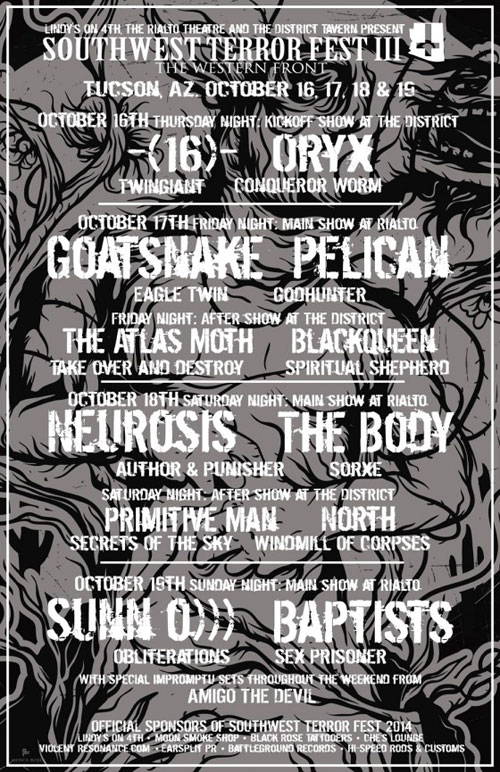 The lineup and running order for the massive SOUTHWEST TERROR FEST III: THE WESTERN FRONT aimed to overthrow Tucson, Arizona from October 16th through 19th has been finalised and announced.

With four nights of action between both the historic Rialto Theatre for the main stage events, and nearby The District Tavern for the kickoff and after-shows, the third and by far most massive installment of SOUTHWEST TERROR FEST takes this now annual extreme metal gathering up to an entirely new level.

Headlining acts for SOUTHWEST TERROR FEST III: THE WESTERN FRONT include NEUROSIS, SUNN O))) and GOATSNAKE. Since previous announcements, both The Fucking Wrath and Night Demon have left the lineup and replaced by Chicago’s THE ATLAS MOTH and New Mexico-based ORYX, respectively. Additionally, Miami-based soloist AMIGO THE DEVIL has been added as the festival’s wandering troubadour for the weekend with impromptu sets at both venues throughout the event. The diverse lineup rounded out with PELICAN, -16-, THE BODY, EAGLE TWIN, BAPTISTS, AUTHOR & PUNISHER, PRIMITIVE MAN, BLACKQUEEN, OBLITERATIONS, NORTH, TAKE OVER AND DESTROY, SECRETS OF THE SKY, GODHUNTER, SEX PRISONER, SORXE, TWINGIANT, SPIRITUAL SHEPHERD, WINDMILL OF CORPSES and CONQUEROR WORM also locked into the itinerary.

Additionally, SWTF III was prominently discussed in a massive cover feature for the Tucson Weekly with one of its creators, GODHUNTER’s David Rodgers, HERE.

SOUTHWEST TERROR FEST was founded in 2012 by members of Tucson-based underground acts GODHUNTER, INOCULARA, DISEASED REASON and GREAT AMERICAN TRAGEDY in conjunction with local venues and businesses, in order to bring a full-bore event to underground music fans the Southwestern portion of the country. 2013’s event doubled in size from the maiden voyage, and now the third installment of the crushing event will bring an exceptional amount of additional new fans to the festival than ever before.