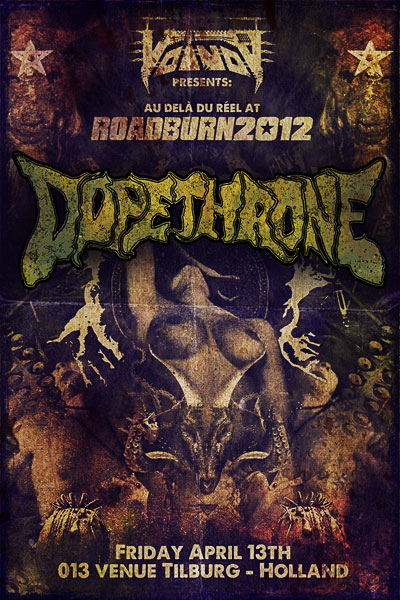 The heaviest D.I.Y. trio from Canada, Dopethrone, was born in 2008 in Hochelaga, Montreal’s trashiest Ghetto. Within the first year, they released their first opus: Demonsmoke, witch became one of Montreal’s best selling Doom album.

A year later, the band experienced some difficulties (Drummer change & lack of weed / beer / gas money) But that didn’t stop them, in march 2011 they released Dark Foil. That Second album ended up getting amazing reviews from around the globe, and of course, outselling the first one. With their slow, pulsating grooves running through the veins of Satan, Dopethrone encompass the bleakness of black metal, the steadfastness of New Orleans-style sludge, and a heavier-than-thou doom mentality. The riffs are thick, punishing, suffocating and destructive. The Demonic vocals are harsh, visceral and animal-like. And the mood is heavy and oppresive.