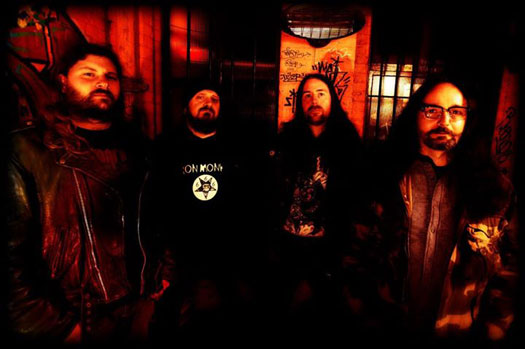 After playing out ‘Carnal Altar‘ for a couple of years, SERPENT VENOM thought it was about time they got stuck into writing a new record. They had some dramas to deal with in real life and shows to fulfil, so they worked through and then found themselves in a position to get cracking with new ideas. Having Roland join the band has brought a fresh outlook and as a result, the whole writing process came together very quickly.

And so in the first week of October 2013, SERPENT VENOM ventured to Skyhammer Studios to once again work with their mate and engineer extraordinaire Chris Fielding. The band walked out 7 days later with a new record in their hands and this is set to be unleashed through Church Within Records in early 2014.

SERPENT VENOM have progressed naturally, the songs are a lot darker, but they have retained the band’s identity and what they are about. The album is titled ‘Of Things Seen And Unseen‘ which has 8 tracks that they can’t wait for everyone to hear, but as a teaser of the heavy riffs to come, you can now stream the new track ‘Sorrow’s Bastard’ below:

More news to follow soon about ‘Of Things Seen And Unseen‘ so stay tuned!