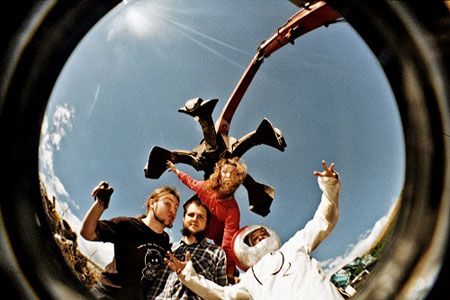 Inspired by traditional grunge and stoner rock genres, SATELLITE BEAVER came a long way through different influences what in practice means searching for thickest guitar strings and biggest crash cymbals ever created. The fuzz and distortion are at maximum levels, producing some truly earth shattering sounds, an eclectic hybrid of sludge, psychedelic and grunge. It hits hard, dripping with atmosphere, as otherworldly sounds clamber over the lumbering riffs to brilliant head-banging effect.

Their latest EP, “The Last Bow” contains tracks recorded through 2010 and 2011, summing up the bands creative journey and giving you an inclination of where they might be headed. Currently, SATELLITE BEAVER are preparing brand new material for their debut album release, which is about to be recorded and released in the second half of 2013 and promoted through an European tour in September. It will contain massive, down-tuned trips to the land of fuzz, which you will be able to hear live at DESERTFEST BERLIN!