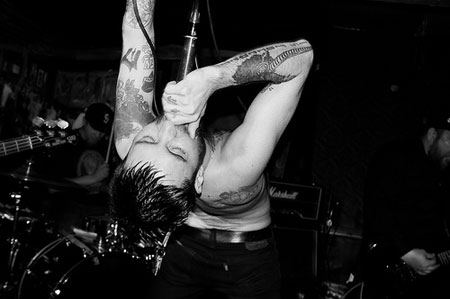 It’s simply strap in, crank it up, and explode!

That is the sound of the DEADKILL‘s debut, self-titled 7″ on Good To Die Records. The LP is four stripped down, no bullshit ragers in the style of vintage Black Flag, Circle Jerks, and The Germs. These four tracks are full-bore rabbit punches to the solar plexus. They’ll knock the wind right out of you, but you’ll be begging for more.

The strength of their sound comes, in part, thanks to the history that each member has with the Seattle rock and punk scene. All five are well-seasoned vets who know just what a song requires. Mike Stubz mans the drums for fellow Good to Die band Absolute Monarchs. Kirby Johnson spent eight years shredding lead guitar with metal icons Himsa. Shawn Trudeau logged time behind the kit for pop-punkers The Meices and The Daves. And Mikey Loftus earned his stripes as bassist for local punks Whiskey Tango.

For the past year, DEADKILL have been taking no prisoners on stages all over their hometown of Seattle, earning them coveted opening slots on shows with groups like OFF!, The Spits, The Hookers, and High On Fire. And as you might imagine, their live shows are as intense as their record. On stage they are explosive, frantic, electric, and loud. They aim to slay every time they play, and haven’t failed us yet.

The beautiful 70 gram white vinyl 7″ is available now directly through the Good to Die Records webstore, as well as at these fine NW independant record stores: Easy Street Records (Both locations), Sonic Boom Records, Silver Platters (3 locations), Everyday Music, and Spin Cycle with more retailers to come. Production for the “Oh God Help You” video began back in April, so look for the first Good to Die Productions joint to drop in the next couple weeks.