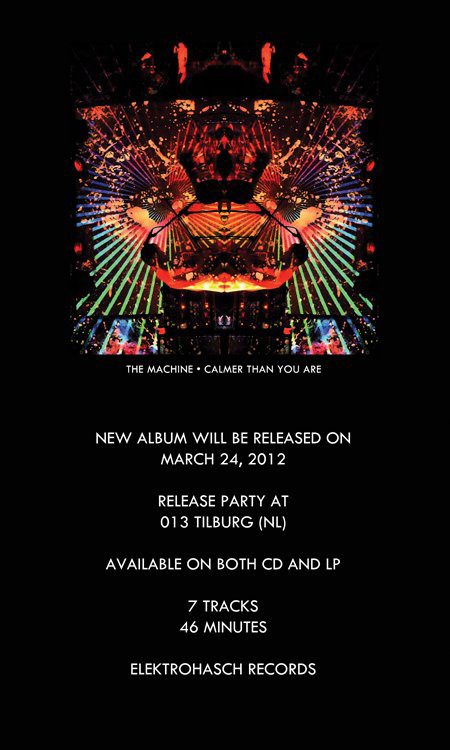 Holland’s very own psychedelic cosmonauts The Machine are streaming their new record, Calmer Than You Are, in its entirety at VPRO 3voor12 in preparation of the album’s release on March 24th at the 013 venue in Tilburg, Holland.  After two stunning shows at Roadburn (the 2010 Afterburner and Roadburn 2011), the 013 venue‘s Green Room is  the perfect location to celebrate this release.

Calmer Than You Are is The Machine‘s fourth album and, like its predecessor Drie, the record will be released via Stefan Koglek‘s Elektrohasch Records on both CD and vinyl. This time around, the band sports a more aggressive sound, but without compromising their  extended psychedelic freak-outs.

Special guests at this album launch will be Monomyth. It’s the brand new instrumental outfit of Sander Evers (ex-35007 / ex-Gomer Pyle)  and Selwyn Slop (ex-Incense / ex-Lucid). Expect some of the very finest prog / space / stonerrock much in the vein of 35007. Please note: it will be Monomyth‘s first ever live performance.

After 11pm, the regular techno night at 013 venue will start, but all of the  attendees are invited to stay, of course.  And The Machine‘s merchandise, especially Calmer Than You Are won’t go up in smoke either.