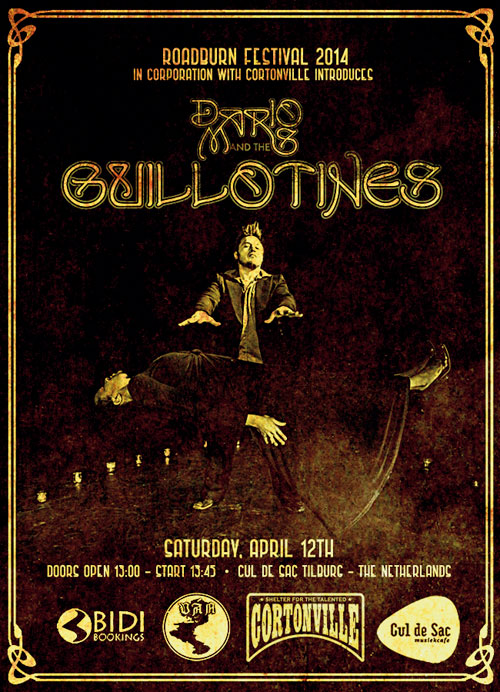 In collaboration with Cortonville, an independent Dutch music platform (think, rock meets alternative), and led by well known radio DJ TV presenter and musician Eric Corton, Walter & Co are excited to announce the fifth installment of ‘Roadburn Festival Introduces’. The original idea is to present promising Dutch bands that have their own vibe while at the same time possessing that certain Roadburn flair, whether it’s a psychedelic slant, roots in the heavy ’70s, an insatiable need to embrace film noir soundtracks or even garage rock and soul.

For the first time ever they’ve looked down south and invited Belgium’s own Dario Mars And The Guillotines to connect with the international Roadburn community during an intimate show at the Cul de Sac on Saturday April 12th in Tilburg,The Netherlands. Doors open 1pm and the show starts at 1:45pm.

Could you imagine listening to the perfect sound track for a late ’60s French black & white movie one moment, and the next to a tune that would fit perfectly for a mystery novel by Edgar Allen Poe or a fantastic story by H.P. Lovecraft, before being drawn into the sound-world of Italian Spaghetti Westerns?

Tarantino himself couldn’t do better in compiling these diverse atmospheres into a unique, undivided whole. Prepare yourself for an eclectic, adventurous journey into sound. Raw, unpolished, honest and always with soul, albeit  a sinister black soul, and enter the mysterious realm of Dario Mars And The Guillotines.

Renaud Mayeur (of whom Eric Corton is a fan) is a unique talent in the Belgian music scene. In the ’90′s he started his career in underground punk-rock and metal bands but became more known due to his membership of the infamous garage-shock band La Muerte from Bruxelles. After La Muerte, he founded his own rock ‘n roll monster HULK with whom he recorded 2 albums, the second of which, Cowboy Coffee & Burned Knives, was recorded in the illustrious Rancho De la Luna studio in Palm Springs Desert, California to much critical acclaim.

Now, Renaud returns with the equally exciting Dario Mars And The Guillotines, showcasing his ability to pair soul and psychedelica with rock ‘n roll and film noir, and the only conclusion we can reach is that he and his new band have something unique and interesting to offer Roadburners.