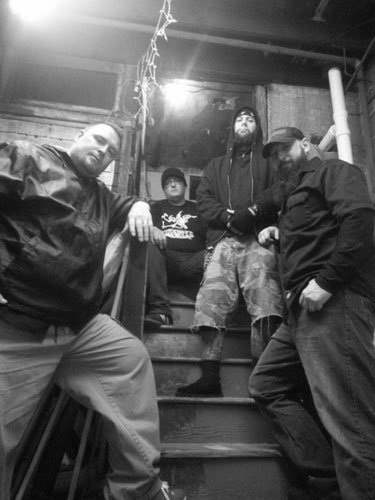 Maryland’s SIXTY WATT SHAMAN rides again, as the act has risen from the ashes to make their return to the stage and studio in 2014.

The classic SIXTY WATT SHAMAN lineup of vocalist/guitarist Dan Soren, bassist Rev Jim Forrester and drummer Chuck Dukehart III — three quarters of the crew who brought the band’s Seed of Decades and Ultra Electric albums to fruition — will be delivering a set of time proven classics as well as some new surprises to celebrate the relaunch of this mighty outfit. Additionally, the band welcomes Todd (TI) Ingram from King Giant aboard as their new lead guitarist to help write the next chapter in their sonic legacy. TI is no stranger to the genre as his heavy riffs and blistering leads are a signature part of King Giant. On the new band activities, Chuck Dukehart III stated, “We are beyond ecstatic to be making music together again! SIXTY WATT SHAMAN is and always will be a brotherhood and we are bonded by blood. It’s always been ingrained in our bones. I can’t tell you how much I am looking forward to writing this next chapter of the journey with my brothers in arms.”

For 2014, SIXTY WATT SHAMAN has confirmed their spot headlining the much revered The Eye of the Stoned Goat IV Fest in Worcester, Massachusetts on May 3rd. The two day fest is an intense gathering of bands from across the rock/doom/psyche scene, this year set to include twenty acts including Curse The Son, Foghound, Kingsnake, Cortez, Volume IV, Beelzefuzz, Ichabod and more.

Besides additional live ventures coming together for the year, SIXTY WATT SHAMAN will also be reissuing select material from the band’s back catalog, and will also step back into the studio to bring a fresh batch of tunes to life.

A household name in the underground rock community, SIXTY WATT SHAMAN formed in Baltimore in the mid-1990s, and released three full-length albums between 1998 and 2002; their Ultra Electric debut on Game Two Records and the subsequent Seed of Decades and Reason To Live via Spitfire Records. Over the years they toured nationally with Nebula, Spirit Caravan, Black Label Society, Crowbar, Clutch, Corrosion Of Conformity, Alabama Thunderpussy and others, and trekked Europe alongside Karma To Burn.

Stay tuned for more Sixty Watt updates on SIXTY WATT SHAMAN in the coming months, including the launch of www.SixtyWattShaman.com.