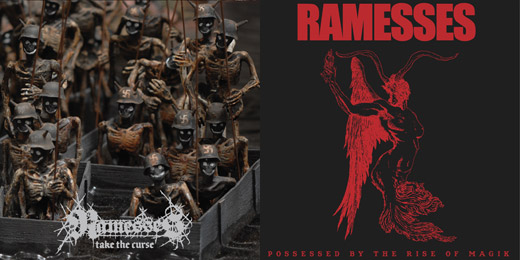 Ritual Productions are preparing to release a double whammy of Ramesses collectibles on wax. This news comes hot on the heels of the announcement that they will be supporting EyeHateGod in August.

The acclaimed album, Take the Curse will be released on 180 gram black vinyl, gatefold packaging and will include an A2 full colour poster and 12inch shaped sticker insert. The release will also include a bonus 7inch with 2 live tracks from Roadburn 2011. Bonus tracks are ‘Take the Curse’ and ‘Terrasaw’.

This will be followed closely by the extra special vinyl version of Possessed By The Rise Of Magik which features remixes by Justin Broadrick (Godflesh/Jesu/Greymachine/Final/JK Flesh). This is what he had to say about his involvement in this project…

“It was with great pleasure that I mixed the Ram album, they’re my favourite dooooom band; not afraid to take chances, and not afraid to let the dope do the talking…psychedelic warlords.”

His remixes enhance the audio with his uniquely dark and affecting musical perspective whilst maintaining the true essence of the original recordings. The way remixes should be. All in all, supremely magik. Do we really need to say both Ritual Productions and Ramesses are extremely pleased with the result? Possessed… will also be released as a deluxe gatefold and there are 800 copies of 180 gram black vinyl and 200 copies of 180 gram clear red vinyl.

Both records will be unleashed on vinyl in June,  the first 75 orders for each record through Ritual website will also receive: one Ritual Productions/RamSS black tote bag plus one set of three foil vinyl stickers. What are you waiting for?

Finally, here is a reminder of the tour dates in August and details of their appearance at Incubate: