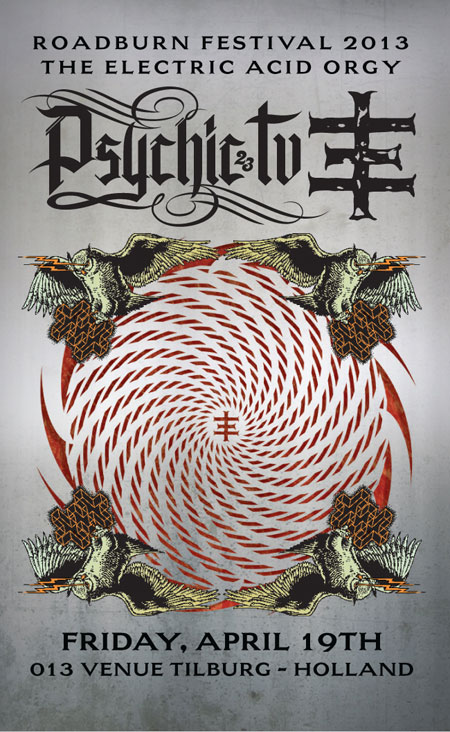 As founder of groundbreaking industrial band Throbbing Gristle, and leader of hyperdelic rock (i.e. psychedelic – or acid rock) collective Psychedelic TV, Genesis Breyer P-Orridge has been pushing boundaries artistic, aesthetic and otherwise, with an unbridled, unique and utterly fearless vision for decades. Whether it’s Genesis‘ one half of a long-running experiment in pandrogynous body-modification with deceased partner Lady Jaye (heartbreakingly documented in the film The Ballad of Genesis and Lady Jaye), or the latest incarnation of Psychic TV, PTV3, s/he has always been at the forefont of the avant-garde, industrial, psychedelia and even acid house.

Since 2003, Psychic TV / PTV3 has been musically leaning towards expansive, improvised psychedelic freakouts that are a real treat for Genesis Breyer P-Orridge‘s wordplay, as s/he rants and rasps her way around environmental concerns, underpinned by piano-like keyboards and sorrowful violin scores. The psychedelia is largely driven by supreme guitar histrionics from Jeff ‘Bunsen’ Burner, with other members throwing in organ chime, booming bass, and thunderous drums.

Presently motivated by a love of performance and recording, Genesis calls the most current line up, led by drummer Edly O’Dowd (of New York’s legendary rock band Toilet Boys), “The best version of Psychic TV ever.”

THE GREAT SABATINI Release New Video For The Track The Royal We; North American Tour Announced