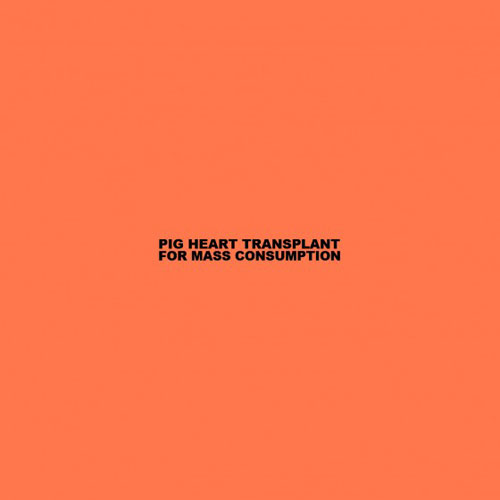 Ignore all false representations of truly apocalyptic and fully predatory soundtrack-style audio behind, and succumb to the engulfing For Mass Consumption, the second full-length documentation of the recorded dementia of Iron Lung’s Jon Kortland’s solo outing, PIG HEART TRANSPLANT.

For Mass Consumption dispatches a distressing twenty-eight tracks of no-wave industrial mayhem in under twenty-one minutes, each track approximately forty-four seconds long and named with a four-letter word, structured in a perfectly palatable way for optimum group adoption and mindless adherence to common purpose. One might recognize the pulverizing brutality of early Swans, the pulsing throb of Brighter Death Now and IRM or even Robert McNaugton’s soundtrack work for Henry: Portrait Of Serial Killer. This is 1984.

For Mass Consumption is appropriately living up to its name, now available for streaming via 20 Buck Spin.

For Mass Consumption is out now in North America on compact disc and digital manipulations via 20 Buck Spin, and Europe will fall to the same fate this Monday September 8th. Order the digital HERE and the CD HERE. Vinyl and cassette editions will follow via Iron Lung Records shortly after.

While Kortland’s main focus is splitting duties in surgical powerviolence duo, Iron Lung, with PIG HEART TRANSPLANT the artist explores an entirely different dimension of musical terror. Here he delivers both a vicious beating and violent outcome, however the operating methodology is an entirely different animal; slow, churning, industrial, electronic, painfully percussive, a bureaucratic nightmare of State Power with gears grinding the individual into a hallow shell, perfectly molded into one of Them. Electronic manipulation, no-wave guitar noise, abrasive hammering and eerie synthetic ambiance imbue the listener with the seedy malaise of manipulation on a societal scale.

Stand by for live incarnations of this endtime audio project and more in the coming weeks.

LYCUS: Tempest US Tour Part I Begins Next Week