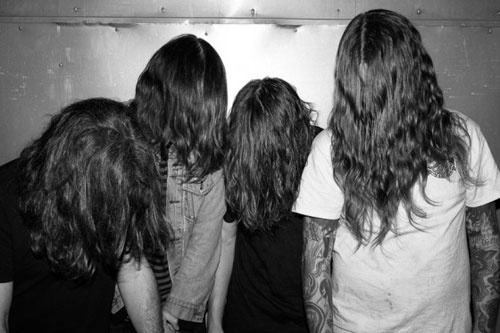 Cali punks, OBLITERATIONS, hit the road this week on their way to brutalize SXSW 2014 with a rash of performances exposing the public to seventeen brand new tracks during the trek, in preparation for their upcoming recording for Southern Lord.

OBLITERATIONS kicked it all off  last night in LA, making two stops in California with The Body and Youth Code, followed by a Southwest run with Lecherous Gaze, after which they raid Austin with at least seven SXSW-related gigs already locked down for the week of festivities. The tour includes performances at the Thrasher Magazine/Converse Death Match with Judge, Tyler The Creator, The Black Lips and others as part of SXSW, The Spillover MF with Ty Segal, Dum Dum Girls, Deafheaven in Dallas, and much more.

Following the tour, OBLITERATIONS will invade Dave Grohl’s Studio 606 to record their debut LP for release via Southern Lord later in 2014. More details on the impending full-length will be released in the coming months.

OBLITERATIONS is comprised of current and ex-members of Black Mountain, Saviours and Night Horse, and, delivering a blazing, crusty, Los Angeles-made blend of Poison Idea, Discharge, and Black Flag, set to a live show that willfully incites and encourages one’s aggressive tendencies to shine, just released a new four-song EP as part of the Volcom Entertainment Vinyl Club.