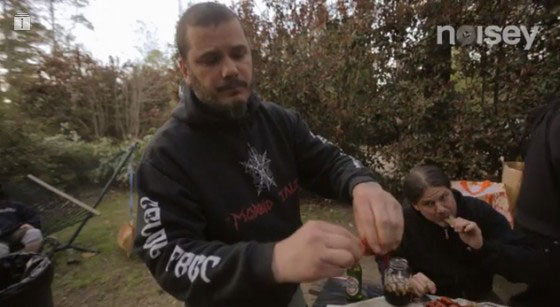 In the seventh and final episode of the NOLA: Life, Death And Heavy Blues From The Bayou documentary, Down frontman Philip H. Anselmo opens up his home for a crawfish boil with the Noisey crew. Meanwhile despite tragedy and significant loss, the natives of New Orleans will not waiver in their fight to write the best riff, and song, in the history of their city.

Life, Death And Heavy Blues From The Bayou is a seven-part series examining the people and the culture that helped foster bands like Down, EyeHateGod, Crowbar, Acid Bath, Goatwhore and so many others. Launched on September 23rd, the series features in-depth appearances from the likes of Philip H. Anselmo (Housecore Records, Down, ex-Pantera), Mike IX Williams (Eyehategod), Jimmy Bower (Eyehategod, Down, Superjoint Ritual et al), Kirk Windstein (Crowbar, ex-Down), and Sammy Duet (Goatwhore, ex-Acid Bath), discussing the bands, catastrophe, drugs, suicide, murder, and records that helped shape the New Orleans sound known the world over.