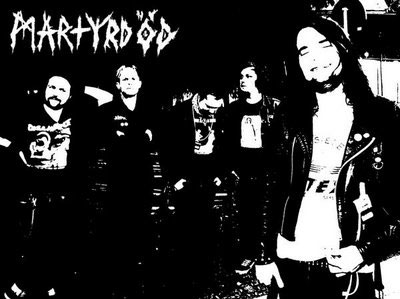 After formation in 2001, MARTYRDÖD, have since slammed the crustpunk and underground metal scene with a surplus of CD and LP releases on such brutal labels as Plaguebearer, Havoc, Farewell, La Familia and Prank, as well as sporadic touring across Europe and a massive offensive on the United States in 2011.

In an scene overabundant with clones of the founding/front running acts of the genre, MARTYRDÖD manage to remain heavily unique in their filth-ridden approach. While undeniably influenced by acts like Anticimex, Bathory, Totalitär, Oral and Wolfpack, the band intertwines their crust roots with sinister, haunting soundscapes and unique riff attacks. With genuine Swedish lyrics, distinguished songwriting manifested through bleak and obscure original artwork MARTYRDÖD will continue to conjure up their blackened d-beat crust, now under the Southern Lord banner.

Paranoia will be released sometime this Spring/Summer 2012. Stay tuned for more updates on MARTYRDÖD in the weeks ahead.