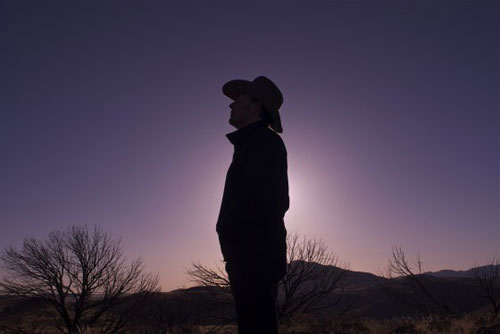 More brief details on the mysterious Brief Sensuality and Western Violence — the impending third solo LP from ex-Melvins/Clown Alley guitarist, composer, songwriter and producer MARK DEUTROM — have today been exposed through the leak of a compelling visual trailer on the album.

The new opus was engineered at Ohm Recording Facility in Austin, recorded by Chico Jones and mixed by Chad Bamford. The nearly hour-long record voyages through both ominous and peaceful territories though a variety of vocal approaches and instrumentation, bleeding together into nearly an hour of MARK D’s most organic and unreserved material to date.

A visual trailer for Brief Sensuality and Western Violence created by DEUTROM has today been released. The soundtrack to the trailer features an excerpt from the album’s opening track “Dick Cheney,” a twenty-minute sonic voyage into the very heart of darkness.

A confirmed street date and more info for Brief Sensuality and Western Violence will be available shortly.

In 1986 MARK DEUTROM formed Clown Alley, and co-founded Alchemy Records with Victor Hayden. Alchemy went on to release albums from the Melvins, Rich Kids on LSD, Neurosis, Poison Idea, Virulence and others in addition to Clown Alley’s debut. He took the road as a sound engineer for acts including GWAR, and the Melvins, who asked him to join the band full-time. From 1993 through 1998 he toured and recorded with the band as heard on their Prick, Stoner Witch, Stag, Honky, Alive At The F**Ker Club LPs among a variety of limited releases, and toured alongside Nine Inch Nails, Helmet, L7, White Zombie, Tool, Kiss, Rush, and Nirvana, including playing at their last concert in Munich in 1994. After, he branched off from things, relocated back to his origins in Texas, and began his solo career which has to date included bluegrass, noise and experimental projects, live collaboration/devastation with SUNN O))) and more, in addition to the mentioned three MARK D full-length studio albums.