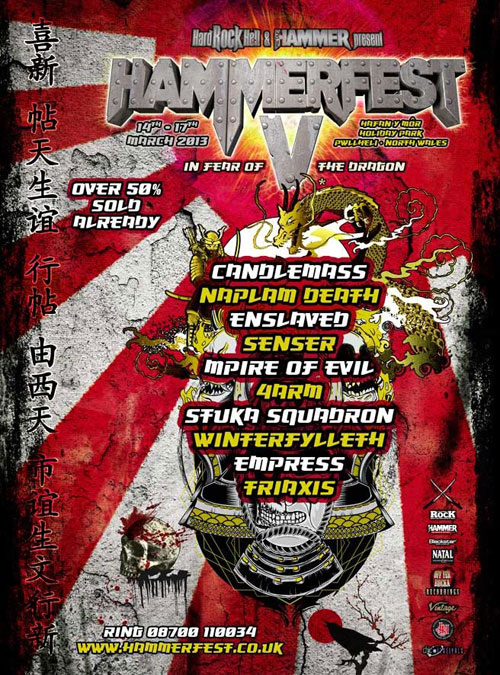 Hammerfest is pleased to announce the final line up for next year’s 2013 Edition with post-punk legends Killing Joke set to headline the Friday night, and the addition of classic American Doom Metal pioneers Saint Vitus also joining the bill alongside a host of other great acts. Hammerfest takes place at Haven, Hafan y Môr Holiday Park, Pwllheli, Gwynedd, North Wales.

Killing Joke have inspired and influenced numerous artists over the years including Nirvana, Ministry, Lamb of God, Marilyn Manson, Metallica, Tool, Opeth, Korn and many other great acts who have all cited a debt of gratitude to Killing Joke, so having them headline Hammerfest is a major honour.

To watch a clip of Killing Joke playing their Classic track ‘Wardance’ Live click below.

Joining them, and adding to what promises to be a truly amazing bill, are one of Doom Metal’s finest and most highly regarded acts, Saint Vitus.

Hammerfest talent booker Seven Webster says “To have both Killing Joke and Saint Vitus join our bill is a personal career highlight for me, as I have followed Killing Joke since their inception, and they have never failed to impress To also have Saint Vitus play Hammerfest, who are an act we have always wanted to have grace the stage the cake on what I believe is one of our best line-ups to date.”

To watch a clip of Saint Vitus performing ‘I Bleed Black’ click below.

Hammerfest is also pleased to announce more additions including Heavy Metal favourites Angel Witch & LA gypsy punk metal act Viza, whose use of instrumentation like the Oud as well as percussion definitely brings something different to the event. Viza have been nurtured and co-managed by Serj Tankian from System of a Down .

We are also pleased to welcome Welsh power sludge trio Hark to Hammerfest. Hark formed out of the ashes of seminal act Taint, and continue to take their legacy forward fusing punk attack with Sabbathian Dirge. To get a taste of one of the most exciting new power sludge acts around, click the below link:

With only 47 rooms left for next years event, HF 5 looks to be sold out by the end of the month ,which will mark it as the fastest selling Hammerfest to date.