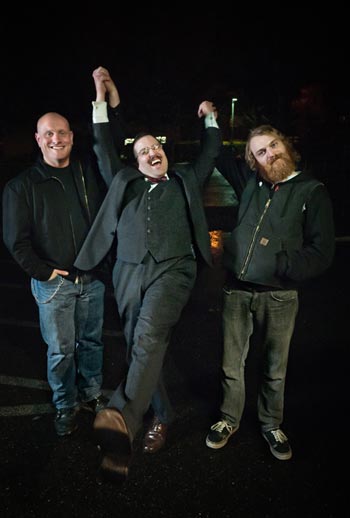 GAYTHEIST. Gay. Atheist. Music for gay atheists? Sure. Music written by a gay atheist? Yes. Music for anyone that enjoys flopping about like a wet noodle in a dryer as chunks of concrete are thrown in every 30 seconds? Definitely.

When that name turned out to already be taken, they settled on the equally awesome GAYTHEIST.

Gaytheist’s song-writing motto: Keep it short. Play it Fast. Keep it interesting. “Would I want to sit and listen to this 30 times in a row?” Every time the answer is yes, a new Gaytheist song is born. And they are born several times a month, if not a week.

Gaytheist claim to have maintained constant erections since learning the home of Monogamy Party and Sandrider wants to put out their latest effort. Now that they’ve played every nook and cranny of Portland and Seattle, Gaytheist is ready to grow from their self-released albums on their own Corflax Records to their favorite indie label in the Milky Way, Good to Die Records.  The band has completed their 3rd full length, “STEALTH BEATS”, and that sweet shit will be available August 21st.

Check out the crushing finale to STEALTH BEATS with the track ‘Condemn The Condemners‘ below.