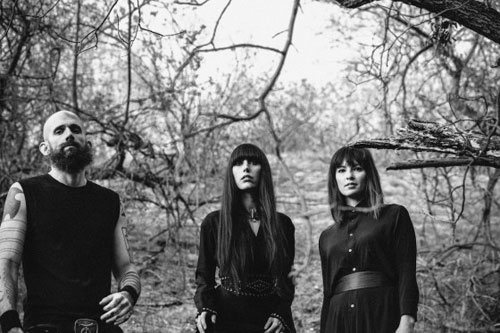 In May of 2012, IDES OF GEMINI unveiled their debut full-length, Constantinople (review here). Its mere existence was a triumph for the three band members—Sera Timms (vocals/bass), Kelly Johnston-Gibson (drums/backing vocals), and Jason Bennett (guitar/backing vocals)—but other folks had some nice things to say about it as well.

Following the release of their debut, IDES OF GEMINI spent much time touring. They played a pair of shows with Old Man Gloom in the Autumn of 2012, before embarking upon a European/UK tour that kicked off at Germany’s South Of Mainstream Festival and saw the band play direct support to Saturday night headliners The Obsessed—and later to a full house at Holland’s Incubate festival.

In January of 2013,IDES OF GEMINI had the honour of opening for their labelmates (and label bosses) Neurosis at the Henry Fonda Theater in Los Angeles. A month-long North American tour as sole support for the anonymous Swedes of Ghost B.C. followed in the spring. This successful journey coincided with two new IDES OF GEMINI songs on Hexagram 45, a special Record Store Day 7-inch released via Magic Bullet Records that had to be repressed before it even came out due to overwhelming record shop demand.

Upon their return to Los Angeles, IDES OF GEMINI played shows with Boris, Deafheaven, and True Widow before hibernating to finish writing and rehearsing new material. Now the new record is ready to see the light of day.

Old World New Wave will be released by Neurot Recordings (CD/digital) and SIGE Records (vinyl) on September 16, 2014. The record was recorded at Valley Recording in Burbank, CA, during the first week of February 2014. It was engineered and mixed by Chris Rakestraw, who did the same for Constantinople and is often noted for his work with Danzig. The album was mastered by Grammy-winning producer Matt Hyde, renowned for his work with Slayer, among others. The artwork and design, including the striking hand-drawn cover, were executed by drummer Kelly Johnston-Gibson.

“The foundation for Old World New Wave was laid before Constantinople even came out,” Bennett reveals. “We had the title, most of the guitar tracks and basic arrangements in place at that point. We’ve been planning this record for a long time, so it’s incredibly rewarding—and a total relief—to finally have it out.”

In the meantime, you can check out a teaser video below for a taste of things to come.