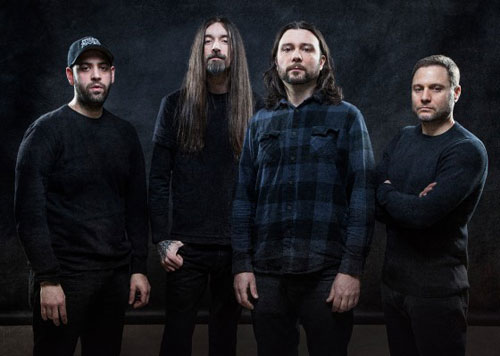 Next week, Relapse Records will release the second LP from NYC’s most dismal death/doom metal outfit, SERPENTINE PATH, with the band’s bludgeoning Emanations. Killer reactions from the metal media underworld are rolling in over the band’s corrosive and potent delivery on the highly anticipated album, as Emanations’ disgusting tones and bleak perspective are captured with incredible production.

The latest single to be released in the ongoing propaganda campaign for Emanations has been transmitted via Cvlt Nation, with the LP’s next-to-final hymn, “Systematic Extinction.” Tune in RIGHT HERE.

Also endure the previously-unveiled tracks “House Of Worship” via Invisible Oranges at THIS LOCATION and “Disfigured Colossus” HERE.

Local hordes are preparing for the upcoming second show ever from SERPENTINE PATH as the band will level Brooklyn in less than a month as a release show for Emanations. Additional live actions from the henchmen will follow later in the year.

Emanations will see release through Relapse this Tuesday, May 27th. Orders for the physical versions of the album can be placed HERE, and via iTunes HERE.

Capturing forty-five minutes of true sludge punishment from this true underground all-star team, Emanations was recorded by Newman, as was their debut, after which it was mastered at Audiosiege. Persevering Emanations and its unfathomable quagmire of low-end riff decay is akin to navigating ones way through a sea of carrion in the dead of night on a makeshift raft fashioned from the remains of your closest family members and acquaintances, every ripple striving to suck you into its fatal current, feeding the demons congregating just below the surface in anticipation.