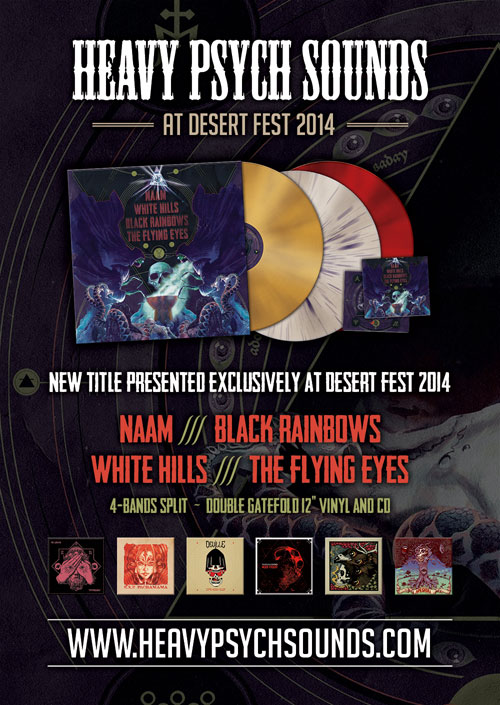 NAAM
Formed in Brooklyn, NY by John Bundy, Ryan Lugar, and Eli Pizzuto, Naam released their first self-released EP Kingdom in early 2009. Many people took notice and they were quickly signed to the renowned Tee Pee Records. In October of 2009, NAAM released their debut self-titled LP, Naam,via Tee Pee and proceeded to tour nationally, supporting acts like Nebula, Orange Goblin, Radio Moscow and The Entrance Band. In 2011, they then embarked on their first European tour, supporting The Atomic Bitchwax and appearing at the Roadburn Festival.

WHITE HILLS
With just the right blend of psychedelia and hypnotic grooves, WHITE HILLS weaves in and out of anthemic chants, deep space bleeps and other worldly madness for a mix that proves to be intoxicating. Since the release of the band’s debut album, listeners have been praising their originality and unique brand of heavy space rock.

THE FLYING EYES
THE FLYING EYES are a heavy, psychedelic rock band hailing from Baltimore, Maryland. Their name comes from a 1962 science fiction novel about giant, disembodied eyes that descend from outer space to control humanity. In July 2013, THE FLYING EYES released their third album Lowlands, which was paid for entirely by the support of their fans through Kickstarter. They supported the record with a 52 date headlining tour of Europe and closed out the year with a one off performance in India at The Synchronicity Festival. Coming off a brief sabbatical, they will kick off 2014 opening for the seminal neo-psych band Loop in Baltimore on April 18th…

The record will be available on double gatefold 12″vinyl with 70 Ultra LTD editions on golden wax, 350 LTd edition on white splatter purple and others on solid red and digipack and features artwork by Solomacello

The release will be presented at DesertFest Berlin and London over the 24th – 27th April 2014, pre-sales start 1sy April and from the 5th May 2014, it’ll be available in the best record shops and via mailorder.