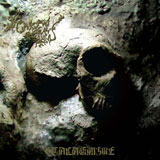 For those who have spent any extended time at sea (myself included), the prospect of a nautical burial, while intriguing, is one of the most disconcerting realities imaginable. Couple that with spending the final days leading up to your death in the throes of cabin fever, where even your best friend would look even better in front of a firing squad. Some artists have an explicit understanding of this mix of complex emotions and their interplay: depression, fatalism, misanthropy, resignation…Saint Vitus explored these themes back in the early 80s with their track ‘Burial At Sea’, one of the first (if not THE first) examples of what would become the sub genre of nautical doom. Over the past 30 years, few bands have capitalized on this niche, and after Ahab set the standard with a definitive example of the genre in ‘The Call of the Wretched Sea’, few should try.

This brings us to Cauldron Black Ram, a band who comes to provide their own twisted take on the genre in ‘Stalagmire’, a 9 track album of nautical horror infused death and doom metal. But the really fascinating thing about this act is their unwavering commitment to the seafaring culture both lyrically and thematically. They make it a lifestyle…and it works.

Album opener ‘Fork Through Pitch’ emphasizes the ‘death’ in ‘death and doom’; with its vocal rasp and swirling lead intro riff, it could easily fit as a ‘Tools Of The Trade’ era Carcass B-side…not a criticism by any means, considering the breadth, scope and impact of Carcass’s catalogue. It’s almost as if Cauldron Black Ram is directly channeling the Jeff Walker/Bill Steer aesthetic until the track rapidly shifts gears into a simple but effective NWOBHM thrash assault. This song (as many others on the album) hides a little golden nugget of surprise around every corner…whether it’s a touch and go tempo change or a progressive flourish, Cauldron Black Ram keeps it interesting. But more importantly, they keep it brutal.

They continue with ‘Maw’, a track that once again showcases the band’s ability to incorporate many different iterations of (extreme) metal into a short span; with ‘Maw‘s mix of melodic doom and hard rock/thrash, and the death/d-beat assault and battery of follow on tracks ‘Discarded Death’ and ‘A Litany Of Sailor’s Sins’, this versatility is on display. While the compositions might lack flow at times, the band should be praised for their ambition. In fact, their ability to interpret the nautical doom genre through a tech-death lens is impressive. The onslaught continues with ‘Bats’, a faster paced rocker that transitions nicely into the blast beat frenzy of instrumental ‘Cavern Fever’. At just over 2 minutes in length, this track wastes no time with filler. If the intent is to pulverize the listener, success is definitely at hand.

Cauldron Black Ram changes gears with ‘From Whence The Old Skull Came’, a slow grind that sure as hell emphasizes the ‘doom‘ in ‘death and doom.’ Once the main riff hooks you, it tears you down, layer by layer…and I’ll be damned if it doesn’t hurt so good. Sometimes simplicity is an important component of the hook, and for this track, it works. Streamlining the arrangements strengthens its impact…couple that with the inclusion of rattling chains (special effects) and I’m sold.

The album is capped off with ‘The Devil’s Trotters’ and ‘Speliogenesis’, the former being a true exercise in percussive/rhythmic acrobatics. If there was any doubt about the precision of the rhythm section (which there shouldn’t have been at this point), this song crushes the nay-sayers. ‘Speliogenesis’, however, is the superior track (and arguably the most accomplished song on offer). There is a gothic undercurrent to this piece, and the band’s emphasis on melody gives the track true staying power. Specifically, the dual lead guitar harmonies and fundamental composition are reminiscent of mid-late 90s era My Dying Bride. Again, Cauldron Black Ram‘s versatility shines through, and I look forward to future releases that showcase this side of the band.

At just over 33 minutes, ‘Stalagmire’ keeps it lean but maintains a plethora of hooks and surprises. While metal album of the year is not in the immediate future, Cauldron Black Ram deserves your attention. Recommended. 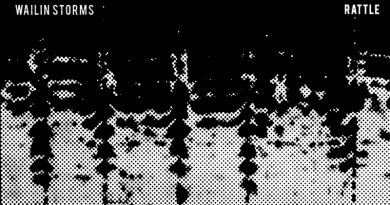