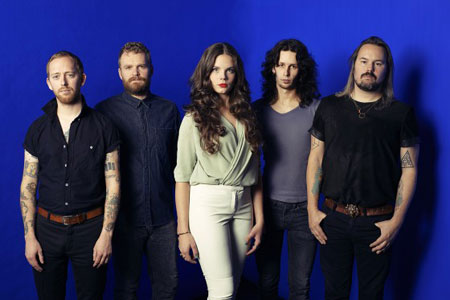 Dutch rock band, GOLD, have announced their first ever UK shows to take place this November. The short run of dates will culminate in an appearance at Hard Rock Hell Festival in North Wales alongside the likes of Airbourne. GOLD recently completed a successful European tour alongside Audrey Horne and Karma To Burn, but this will be their first time on British soil.

Guitarist Thomas Sciarone comments:
“Great Britain, you are next! After sowing the grounds of Germany, Austria, France, Belgium and the ol’ mother country, we are happy be to planting the seeds of the future in the UK. We are very excited to share stages with our new doomy and gloomy friends in Alunah (Liverpool, November 28th) and Iron Void (Huddersfield, November 29th) and we are especially looking forward to be turning heads with our fresh brand of heavy rock on our UK festival debut at Hard Rock Hell on November 30th. Are you curious why hiking metal punk Fenriz listed us in his best of 2012? This is your chance to find out!”

GOLD are a contemporary rock band based in the Netherlands. The songwriting core of GOLD exists of guitarist Thomas Sciarone (ex-The Devil’s Blood) and singer Milena Eva and is enriched by Igor Wouters (drums), Harm Haverman (bass) and Nick Polak (guitar). Their debut album, Interbellum, was released last year via Vån Records. The album is available to purchase HERE and you can read Mark Hunt-Bryden’s review HERE.