Cheeky doom ‘n’ rollers GROAN are no stranger to to all that is heavy, riff-laden and outright ridiculous. Combining modern doom with ’80s hair-metal sensibilities and excelling overwhelmingly at both, GROAN certainly never take themselves too seriously. And now Terrorizer are streaming GROAN‘s forthcoming EP, Ride The Snake, in its entirety prior to its December 10th release at THIS LOCATION.

While Pre-Orders are available through Superhot Records HERE.

Read on for more info about GROAN…

Excelling in a live environment, UK reefer-based riff rockers GROAN released their debut album “The Sleeping Wizard” in 2010 through Doomanoid Records. Originally a one-man bedroom project, they were soon booked for live shows across the UK where they’ve truly established themselves as one of those bands you just have to see live – fully backing up the talent they’ve shown again and again on their self-recorded and self-produced material.

In the nine months after the album was released, the band played live all over the country, smoked the GDP of a small African nation, wrote off a three day old Ferrari California, decorated their rehearsal room with gifts from hookers and split up and re-formed in a day that must have been a full moon.

Their follow up, a split EP with Finnish band Vinnum Sabatum, was also hyped to the moon by critics upon its release in 2011.

GROAN’s second album, “The Divine Right of Kings” was released in October 2012 through Dutch label Soulseller Records and like their previous two releases, was recorded, produced and mixed by the band themselves. Egos once again inflated by critics, the band supported the release with a short UK tour that they remember only through haze-tinted spectacles.

After an incredible live show at London’s Desertfest 2013, the band returns with an all new lineup: founding members Mazzereth (vocals) and Leigh Jones (bass) are now joined by Mike Pilat (ex-Ocean Collective) and James Beedham on guitar with Zel Kaute (ex-Pettybone, Vodun) smashing the skins. The band self-produced, recorded and mixed a new five track EP named Ride The Snake with former drummer and guitarist Chris West that will be released on December 10th through Superhot Records, with a UK tour to follow that week, too. 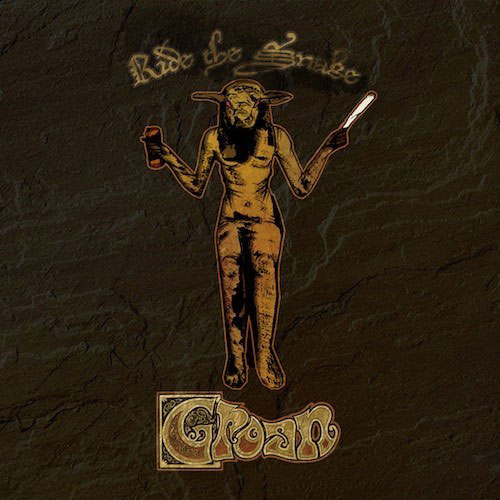 STONE AXE Back In The Writing Process, Aiming At New Full Length In 2013