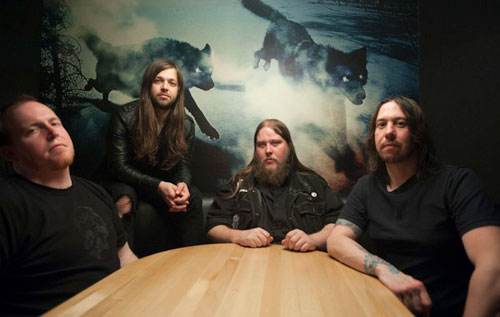 LORD DYING come from Portland, Oregon, a place over abundant with purveyors of the heavy riff. A region where the inhabitants are plagued with nerve and joint damage due to lack of sunlight. In a time where everyone is trying to out-sludge or out-doom each other LORD DYING gives something less than a fuck. They are a metal band with members of Black Elk, Portals, Le Force, and Cremains, who in their short, one year’s time as a band have shared the stage with Red Fang, Down, Unsane, Yob, Valient Thorr, Ghost and many others.

The band recently finished work on a video for the song Dreams of Mercy. The video was shot by Whitey McConnaughy (Red Fang, ZZ Top). Check it out below:

Their new album Summon the Faithless can be streamed in full on LORD DYING‘s bandcamp page HERE and you can also read Steve’s recent review HERE.

After a quick break from touring the US with label-mates Howl, LORD DYING will return to the road with Valient Thorr and Ramming Speed in the US. The band also has confirmed a festival appearance at Phil Anselmo’s inaugural Housecore Horror Film Fest alongside Pig Destroyer, Down, Repulsion and many others!

After releasing a self-titled EP in 7″ form, the dudes kicked it up a notch, heading out on national tours with Witch Mountain followed by a long trek with label-mates Red Fang and Black Tusk. Fast forward to 2013 and LORD DYING are poised to be the new heavyweight champions of metal.

LORD DYING‘s debut Summon the Faithless is available now on Relapse Records. The album is available in CD and LP formats which can be purchased HERE and digitally via iTunes HERE.