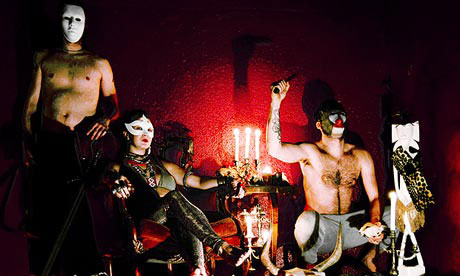 Swedish psych afrobeat collective, GOAT, will be playing their first headline London show on Thursday 27th June and tickets will go on sale Tuesday, 10am at http://detour-ldn.songkick.com/tickets with venue and support to be confirmed soon.

GOAT’s stunning debut album, World Music, received unanimous praise across the board, and appeared in a number of best of 2012 lists, including Rough Trade, Piccadilly Records, Uncut, Stool Pigeon, Loud & Quiet, Rock A Rolla etc. The Quietus described it as a “forceful and infectious masterpiece of cosmic rock & roll”, whilst the Guardian reviewed it as “one of 2012′s biggest underground rock albums” and “head-spinningly great fun throughout”. We couldn’t agree more, and not forgetting this very website as you can read Todd’s review HERE.

It’s not just their album that’s good either, GOAT’s live performance at Supersonic was a highlight of the festival! They played their first ever public show back in October at the London Lexington with Teeth of the Sea and Gnod. We’re expecting this London show to be HUGE! If you’re still not convinced, check out the two videos below.

‘World Music‘ is out now on Rocket Recordings.

Tilburg Trakteert: Where Purgatory Ends – The Art Of Costin Chioreanu At Roadburn 2012