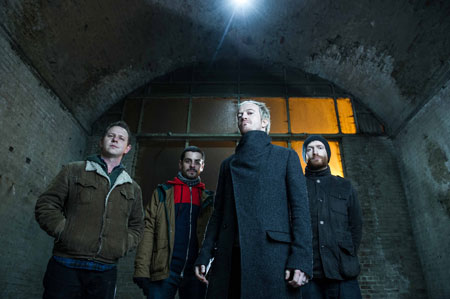 As a band that has been in existence for close to 12 years now, HUMANFLY are somewhat of an institution in the UK. As purveyors of the mighty ‘riff’ they are without doubt one of the best.

2010’s ‘Darker Later’ was highly praised by the likes of Metal Hammer, Classic Rock, The Quietus and Terrorizer for its monumentally crushing riffs and immensely dark atmospherics. So much so that Dan Carter’s ears sharply pricked up and he brought them down to Maida Vale to record a live session for his BBC Rock Show.

The band managed to then earn a spot on the Scuzz sponsored Earthone9 tour alongside Maybeshewill and The Ocean. In late 2011 they opened Damnation Festival to a packed out room before stepping back to begin work on their next album.

HUMANFLY’s previous 3 albums saw them gradually edge away from their original fast, hardcore, DIY punk sound through to post-metal, now taking them to their current form which in the case of new album ‘Awesome Science’ is a massive prog beast.

There’s been a shift in dynamics which may come as a surprise to many who were used to the ‘quiet > loud > even louder’ formula that worked so well. ‘Awesome Science’ is very much and in every sense, shape and form a prog album.

HUMANFLY have crafted an astonishing record that moves, shifts and at certain moments elevates the listener leaving them gobsmacked by the sheer musicianship on display. Think King Crimson meets The Mars Volta and you are almost there.

The band have also just completed a UK Tour supporting Cult Of Luna with more live dates planned throughout 2013, you can also stream the track ‘Golden Arrows‘ below and ‘Awesome Science‘ will be released by Brew Records on Monday 11th February 2013.