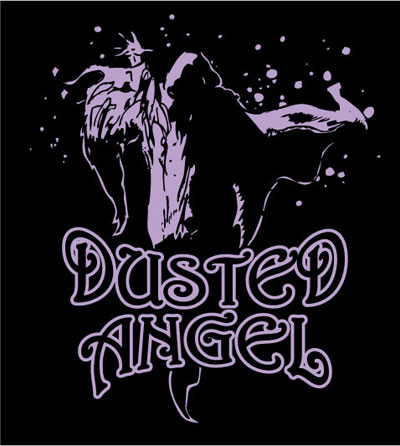 After over a year burnt up due to injuries and member changes, Santa Cruz bastards DUSTED ANGEL are ready to re-emerge this Spring with their rehabilitated new lineup!

Vocalist Clifford Dinsmore issued a statement on some background of where the new skin-smasher came from and how it’s an important step for DUSTED ANGEL, and even a bit about the newer, harder sound the band has taken on.

“Our new drummer’s name is Steve Ilse, and he is on fire!” Dinsmore states. “Our background together goes all the way back to High(at) School. The very first bands I was in were with him: Suicide Prone, and Holocaust, circa 1980/81. I had some heavy shit going on when I was a teenager and when Steve and I became friends, his parents took me in, and treated me like a family member for years. M.A.D/Bl’ast! pretty much formed, and had first practices at what we called the ‘Ilse Mansion.’ His parents were so cool — they would let all the punk bands practice in the garage, and during a couple of summers there were like 10 people living in that garage. His Mom would cook for all the touring bands, some of which over the years include Scream, Govt. Issue, SubHumans, L7, Helmet, Nirvana, and others to numerous to mention… or even remember at this point. Steve was also in an awesome punk band called Creature, with Eric and my bother Dave.”

“DUSTED ANGEL did a string of West Coast shows with Fu Manchu, and were riding high on the release of Earthsick Mind, when our drummer; Bill Torgerson decided to quit…. we were devastated! Anyone who knows Bill knows he’s an impossible drummer to replace, and we felt like we could only turn to one source…. Steve. He was very ‘helpful’ trying to find us another drummer until I finally just said; ‘come on… you’re the only one that can do this!’ He was really busy with his other bands — Automatic Animal and Quarto Verde — and we didn’t want to impose. He finally said he’d fill in until Bill came back, or we found someone, and accidentally had a little too much fun, becoming a full-time member. In the meantime, I suffered a serious back injury that forced us to cancel several shows. While we were breaking in Steve, and I was healing, we started putting together the new record. This shit is going off! Harder-edged, heavier, and slightly more BL’AST!-like, yet still keeping the groove people have come to expect from DUSTED ANGEL.”

While DUSTED ANGEL continue to build more new doom-laced hardcore jams for their next LP, in addition to seeking out a new label home to release the new material, some killer video footage featuring the revamped DA lineup and even brand new songs “Christ It’s Hot/Death Crushes Hope” and more can be viewed below and you can also read Paul’s review of 2010’s ‘Earth Sick Mind’ HERE.

Having toured the West Coast of the US for the past four years — most recently touring last year with stoner rock legends Fu Manchu — DUSTED ANGEL will take to the road once again over the coming months with their new lineup and new material. Stay tuned for more news on the band in the coming weeks.