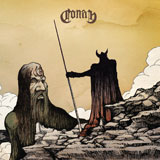 Conan seem to be the band on everyone’s lips at the moment; signed to Burning World Records, an enviable slot at Roadburn Festival on the horizon and being flown to Oslo to support the one and only Sleep – it’s not hard to see why based on appearances alone. Add to that the praise that the band’s earth shattering live performances and debut album Horseback Battle Hammer have garnered them and Conan look to be the breakout band of 2012.

And on that (brown) note, Monnos is exactly the kind of album you’re going to want to make to match the expectations of the fans and sceptics based on all of the above. From the first oppressive, brow-beating chug of monolithic opener “Hawk As Weapon” to the final wall of feedback on“Invincible Throne,” Monnos is amazingly accomplished, singular in its apocalyptic vision and densely layered. And by dense I don’t just mean the dropped-F tuning that the guys reportedly use. Not only are the songs heavy (and I’m talking heavy), they’re also strangely otherworldly. When Jon Davis’ lets out his signature siren-call it sounds like a message that has filtered through time, telling us of some long-forgotten massacre from the Dark Ages and the music acts as a grim backdrop to it all. As pompous as that sounds, these aren’t your everyday doom songs – this is a timeless doom record and it’s heavier than just about anything you’ve ever heard.

Opening track and live favourite “Hawk As Weapon” gets the ball rolling in a suitably monumental fashion, summing up everything that is great about the band in a concise and cataclysmic 6 minute blast of heavy riffing and booming vocals. “Battle In The Swamp” builds on this formula by combining a surprisingly emotive chord progression and vocal delivery to create a tragic mood.  In contrast “Grim Tormentor” is menacingly triumphant-sounding (and the song most likely to rouse a Conan audience into actually moving) with its all-conquering, almighty groove.

At the midway point the guys take everything down a notch for the subdued instrumental “Golden Axe”, a contemplative and atmospheric moment of peace in the eye of the storm. After this interlude “Headless Hunter” sounds like the unstoppable approach of some malevolent force. Indeed, the last two minutes of the song defy clever analysis or big words; they’re simply badarse with a riff that’ll make you want to stomp around your house knocking things off tables, imagining they’re foes to be vanquished. Finally, devastating album closer “Invincible Throne” is like the pitch-black veil of evil sweeping across a war-torn battlefield – axes, shields and corpses scattered carelessly in the wild abandon of defeat.

This is an hypnotic album that really needs to be heard as a whole. I first listened to it whilst driving down the motorway in the pouring rain on a dark grey, apocalyptic day and it was the perfect soundtrack. In fact, me and my partner were half way through the album before we realised that we’d been sat there in silence and we turned to look at each other, mouths agape. There’s something about the combination of Davis’ and bassist Phil Coumbe’s vocals atop such an unstoppable wave of uncompromising doom riffs that is entrancing. While Davis chimes out in the distance, Coumbe’s deep, booming growl anchors him to the thick layer of bass-heavy fuzz underlying everything. Paul O’Neil is a wonderfully complex drummer too – he fills the long spaces between notes with interesting cymbal flourishes and accents, all without being too busy or overly complicated for the sake of it. He gives the album its characteristic driving force.

If you’ve failed to appreciate Conan up to this point then now is the time to check them out and to give these guys the respect they deserve. Monnos more than lives up to the promise of its predecessor; it’s a giant, lumbering beast of an album, the perfect weapon to make heads roll and to take the band to the next stratum in the underground hierarchy. It’s an album that will hit you at that primal level before thought or reason comes into the equation – real caveman doom! If Monnos proves anything it’s that there’s heavy and then there’s Conan. 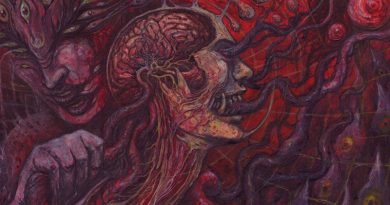