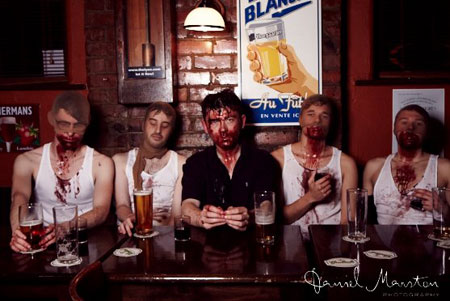 Nately’s Whore’s Kid Sister are a band that set out to develop the audio and visual aesthetics of contemporary popular music. Formed in 2010, the Newcastle based five-piece comprise of members or the acclaimed Grandfather Birds and [now defunct] Flowers of Evil, with the intention of making loud, stimulating and creative audio.

Given the individual histories of each member, and their previous involvement within the capitalist mainstream of modern music, Nately’s is a natural response to the false pressures and the malaise endemic with today’s music industry. Where convention no longer cuts, Nately’s focus intently on invention.

The strong band character can be seen distinctly in their live performances. Building a set around impact, the band include both strong visual content (in the form of costume, presence and projections), and stimulating sonic textures, sampled from day to day life. This is all interspersed within their staple of bold riffs and haunting vocals.

For a list of influences, think Bjork or Radiohead twisted by the darker, more brooding sounds of Sleep and Omega Massif.

Now stream the track ‘Babies‘ below or download it from HERE: