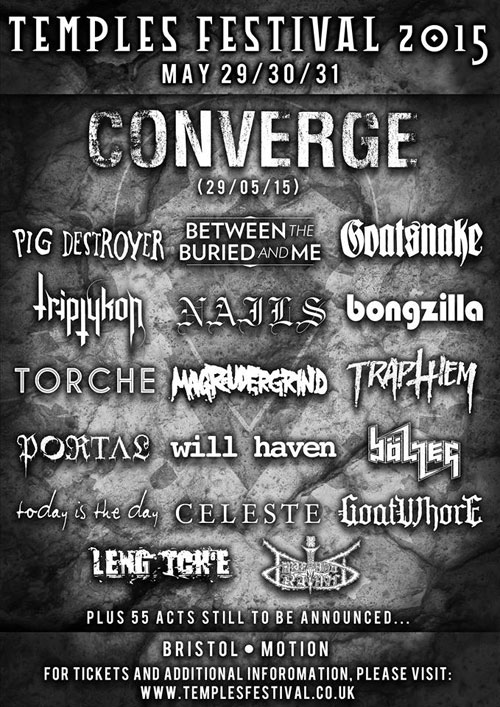 Temples Festival are ecstatic to welcome their first headliner of 2015, performing in Bristol for the first time ever as their only UK show of 2015; the legendary Converge.

Converge will be joined on our Main Stage by an onslaught of prestigious bands (including both Nails & Trap Them) on Friday May 29th – which, at the risk of perpetuating stereotypical promoter hype……is gearing up to be one of the most chaotic line-ups the UK will ever witness.

Furthermore, please welcome another 17 bands to the Temples Festival 2015 line-up (in no set order);

With an additional 55 artists yet to be announced, including both the Saturday and Sunday headliners – Temples Festival 2015 is firmly on track to match the calibre of artists on offer at our inaugural edition, and follow on with the simple theme of well-programmed & diverse underground heavy music.

Temples Festival 2015 will also include the addition of a third stage, an outdoor ale/cider bar, high-quality catering suited to both vegan and carnivore dietary requirements alike – and all set within the confines of one of the most unique and versatile venues in the UK. This truly is shaping up to be something monumental.

Weekend Tickets are now available from www.templesfestival.co.uk, Day Tickets will not be released until later in the year.