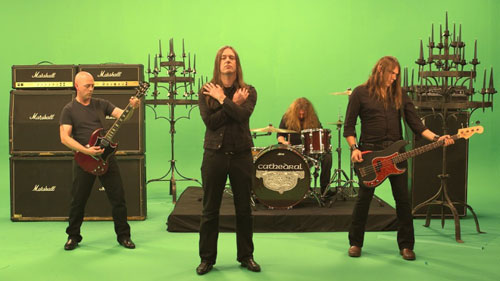 CATHEDRAL are currently putting the finishing touches to what will be the last ever album from these British Doom legends. Produced by Lee Dorrian and Garry Jennings, with assistance from Jaime Gomez Arellano, The Last Spire is scheduled for an April 20013 release.

The tracklisting is as follows;

Non-album track Vengeance of the Blind Dead will appear as a flexi disc on the front cover of Decibel Magazine in their March issue (on sale February 7th).

The band also recently shot a fantastic promo for new track Tower of Silence,which will be available to view some time in January.

The track will appear on an exclusive Rise Above Records CD sampler to be given away with Classic Rock Magazine towards the end of the same month.

In related news, SEPTIC TANK, a band featuring CATHEDRAL members Scott Carlson, Garry Jennings and Lee Dorrian will make their debut live appearance at The Garage, Highbury & Islington on Friday 3rd May. They will be openning for Carlson’s legendary institution of grind, REPULSION, who will be make their debut headline UK performance. Special guests are Necrophagia. Tickets here.

SEPTIC TANK will release a very limited vinyl only EP titled The Slaughter via MCR Records, Japan, to coincide with the show. They will have a limited number of exclusive colour copies on sale exclusively at the event.

Side B
01. Gotesque Cavalry of Mankind
02. The Slaughter