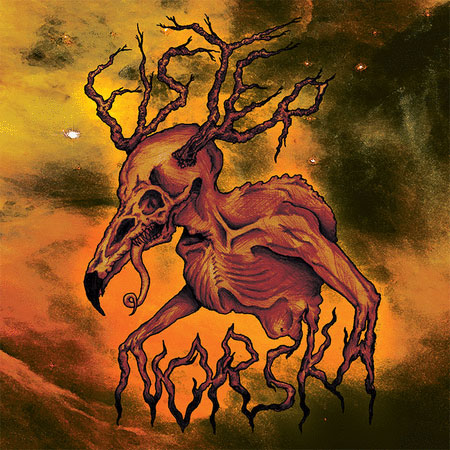 Hot on the heels of the announcement of Black Bow Records 1st release, the debut album by BAST (read more about it here), they’ve also announced details their 2nd release, entitled ‘Equinoctal‘, it’s in the form of a split 7” vinyl between two of the US Undergrounds heaviest hitters. Riffs and anguish and hatred and depression – channelled through burning amps and smashed fuzz pedals. This collaboration between FISTER (St Louis, Missouri) and NORSKA (Portland, Oregon) will come out on heavyweight vinyl, with artwork by the supremely skilled Scott Fogelbach.

FISTER is a three piece doom metal band from St. Louis, Missouri. The band incorporates heavy influences from the black and death metal genres into a depressing sludge spewing heaviness that many have attempted, but few have mastered. FISTER‘s latest full length ‘Gemini’ is a testament to this, as the band captured the aural equivalence to watching a Cronenberg film on barbiturates. The band recently reunited with producer/engineer Gabe Usery for their newest installment of dread inducing heaviness as an offering for their newest split with Oregon’s NORSKA.

NORSKA, made up of Jim Lowder, Aaron Rieseberg (Yob), Dustin Rieseberg and Jason Oswald, are a sludge/mountain-man doom outfit from Portland, Oregon, and thereabouts who have managed to find a home for their diverse musical disciplines in a project that is both sonically and cerebrally heavy. NORSKA’s unique brand of metal displays the extremes of human emotion in musical form, ranging from enraged, pummeling riffs and inhuman growls to moments of uplifting, quiet triumph and, ultimately—briefly—merciful resolution. For fans of Isis, Yob, Conan, Tool, any other type of thinking-man’s heavy music—or anyone else seeking deafening sonic catharsis.

In the meantime, you can stream ‘Black Friday‘ by FISTER and NORSKA‘s self titled album below: