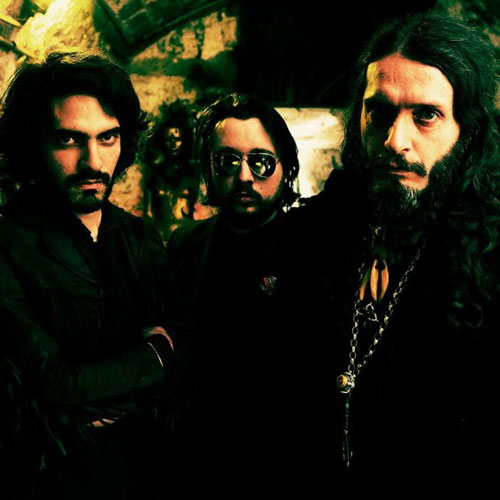 Celebrated French underground psych rock trio AQUA NEBULA OSCILLATOR will release its new album Spiritus Mundi on November 5 via Tee Pee Records.  The record’s title translates as “cosmic consciousness” and the LP is the highly anticipated follow up to ANO‘s 2012 release Third, which was hailed as “a mind-boggling and wicked adventure” by Popmatters.  Now, with a head of steam and an established name in the U.S., AQUA NEBULA OSCILLATOR drills down deep into the center core of cult music, creating its most accomplished recording to date.

Spritus Mundi contains 11 nighttime tracks brimming with rhythmic switchbacks and momentum swings that push darkness into strange and intriguing corners.  The record replaces ANO‘s riotous rollicking with shadowy landscapes of grim sound that encapsulate the band’s eccentricity.  From the psych-rich shake of “Turn on Your Mind” and “Human Toad” to the death-ride kick of “Up to the Sky” and “Crystal Man” through to the twisted take on the 13th Floor Elevators‘ “Roller Coaster“, AQUA NEBULA OSCILLATOR‘s Spiritus Mundi plays like a haunting dream of dark and disturbing things, offering a can’t-miss masterclass on the emotional possibilities of sound.

“On “Spiritus Mundi”, we decided to record outside of the medieval caves of Paris, this time in an old creepy house in the middle of the Pyrénées mountains with one of the best french analog sound engineers,” comments AQUA NEBULA OSCILLATOR bandleader David Sphaèr’os. “We used a lot of different instruments including Spanish guitar, violin, sitar, bells,gong, 12 string guitar, valve echo guitar and organ. This album is full of variation, from space rock, spoken french and english poetry, animal screams, dark acoustic spacial dreamy song, Spanish Latino rhythms, fuzz echo apocalyptic distortion and oscillation!  This album is one of our most eclectic, totally handmade by the band — including the artwork — and captures the best recorded sound of Aqua Nebula Oscillator to date.”

AQUA NEBULA OSCILLATOR has just been announced as the latest addition to the 2014 Roadburn Festival, set for for four days from Thursday, April 10 to Sunday, April 13, 2014 at the 013 venue in Tilburg, The Netherlands.  For the official announcement and full details, visit THIS location.

AQUA NEBULA OSCILLATOR — formed in 2000 by David Sphaèr’os — creates utterly unique and fantastically tripped out occult psych rock inspired by parallel dimensions, voodoo, ethnic trance, horror and cult movies (from the 1920′s to the 60′s), painters like Hieronymus Bosch and Salvador Dali, dark underground literature (H. P. Lovecraft, Isidore Ducasse, Antonin Artaud), aliens and UFOs!  A modern mix of Krautrock / motorik with Hawkwind-style psychedelia, Hendrix-styled, ultra tripped out guitar action and an apocalyptic, Raw Power energy, AQUA NEBULA OSCILLATOR‘s mind-burning, dark and dirty “chaos-sound” is a cauldron full of seething, psychedelic rock. ANO looks and sounds like it was buried in a tomb in the late 60′s / 70′s and has just been dug up, ready to resume its wild sound-making once again.

AQUA NEBULA OSCILLATOR was the hand-picked opening band for THE CULT‘s 2009 European “Love” tour, has shared the stage with bands such as The Dead Weather, The Black Angels and Black Acid and is highly recommended for fans of Joy Division, Black Mountain, Hawkwind, Man’s Gin, Goblin, MC5, Roky Erickson and Acid Mothers Temple!