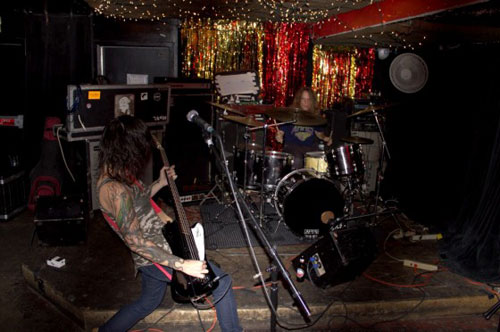 With its official unveiling now just a few short days away, today the dirge devils at The Obelisk unleash the low-end rumble of AKRIS’ self-titled debut in its entirety.

In a near perfect review, HeavyPlanet dubs the recording “hypnotic and painful,” commending the band for offering, “a permeating ache that slowly and steadily hums between the legs and haws with deliciously punctuated buzz… The flatlined bass-belch grinds on knobby cruisers like ‘Profit’ and ‘Row Of Lights.’ Guttural and emotional, AKRIS blends groove and haze with skull-rattling spite. Embers crackle on ‘Part Of Me,’ appearing at your feet and sinking before your eyes. And ‘Redeemer’ sticks like hot glue and burns like hell, lifting and grooving merely a hair after a signature drone-drift. [Helena] Goldberg’s bark grabs you by the wrist and drags you across the playground. Your friends are watching, but what the hell can you do?” Agrees The Obelisk, “the Virginia bass/drum two-piece proffer sludge that ranges from unrepentantly abrasive punk-derived aggression (hello, ‘Unidentified’) to languid stoner nod topped with harmonized vocals (hello, ‘Riverbed’). At the fore is bassist/vocalist Helena Goldberg, whose varied approach and blanket of low-end tonal gorgeousness drives the band along with drummer Sam Lohman, and whether she’s cleanly hitting notes in the slow-churning ‘Suffocate’ or screaming in layers on the raging push that emerges within the earlier ‘Profit,’ her leading role is never really relinquished.”

Turn up and tune out at, courtesy of The Obelisk, at THIS LOCATION. 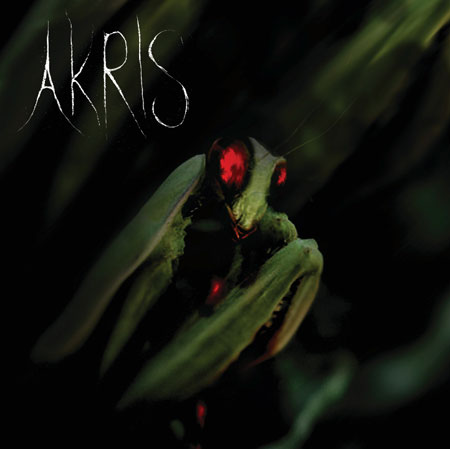 The story of AKRIS begins in the middle, on a fateful June night in 2011 when vocalist/ bassist Helena Goldberg met drummer Sam Lohman at a house show in Alexandria, Virginia. An accomplished and classically trained pianist, Goldberg began playing bass while studying piano and composition at the Manhattan School of Music, graduating in 2008. Her uncle and mentor, world renowned master musician and accomplished recording artist Charles Burnham, gave Goldberg her first bass and taught her improvisational skills. A deep knowledge of musical theory and composition mixed with a deep, near-gut wrenching adoration for heavy music is where AKRIS derives its sound. Powered by Earth and Sunn amps, Goldberg’s bass sound can only be matched by the sheer concentration of her vocals making for an avalanche of sonic severity. Lohman, who appears on the debut but was recently replaced by Cheykha Bessid, has been playing clubs since 1980 and has since performed with various bands including Sheer Terror, Dust Devils, Nimrod, Sikhara, Steve Mackay and the Radon Ensemble, Acid Mothers Temple, Sonic Suicide Squad, and his solo noise project, 36.

Akris will see release via Domestic Genocide Records on September 24, 2013. For preorders, point your browser HERE.