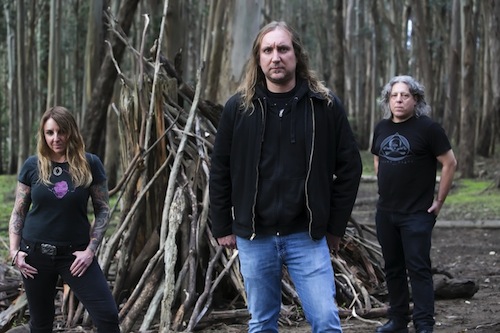 Roll out the red carpet – ACID KING are breaking their ten year studio silence with a new, deliriously heavy album, Middle Of Nowhere, Center Of Everywhere.

On their fourth outing, the three-piece maintains the corrosive concoction at the heart of their identity, while simultaneously progressing. “I really wanted to add more depth and layers to our signature sound,” says Lori. “Everything still feels like riding a motorcycle on Quaaludes, but things have expanded. It was important that we didn’t write the same record over and over again. This is a little moodier. It happened organically that way.”

In order to achieve that goal, the musicians riffed away in their Bay Area practice space, and the good old fashioning jamming yielded eight artfully architected tracks bookended by an Intro and an Outro, fusing together a cohesive journey.

Middle Of Nowhere, Center Of Everywhere was recorded at both Sharkbite and Tiny Telephone Studios in San Francisco, mixed at Different Fur Studios and produced by ACID KING and Billy Anderson. Striking artwork from famed tattoo artist Tim Lehi (who has designed cover art for High On Fire, Earthless and Witch) provides a preliminary indication of the cosmic scope of the musical innards, check it out below, along with the full track list: 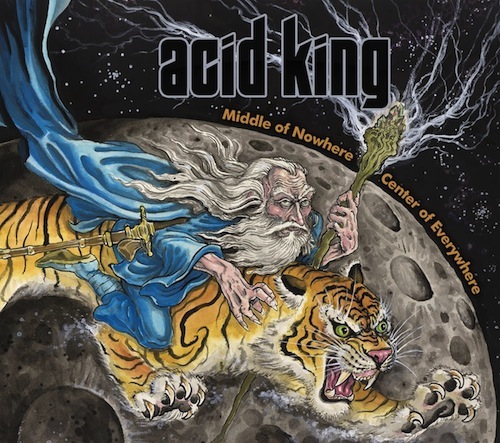 Certain pillars uphold the underground. Their influence pervades throughout future generations, shaping the sound, style, and spirit of artists for years to come. Such can be said of ACID KING, bubbling up from San Francisco in 1993 through a fog of revved up riffs, thunderous drums, and hypnotic vocal howl. This unholy triumvirate of visionary, vocalist, and guitarist Lori S, drummer Joey Osbourne, and bassist Mark Lamb existed before terms like “stoner rock” and “doom metal” entered the musical lexicon.

They unleashed three EPs and three full-length albums, starting with Zoroaster in 1995, the 1999 full-length Busse Woods, and culminating on 2005’s Acid King III. Their seismic chemistry transfixed audiences everywhere from high-profile festivals such as Hellfest and Roadburn to now iconic shows alongside peers such as Sleep and Mystick Krewe of Clearlight. As personal lives became busier, they focused on a handful of packed local shows and special appearances overseas during the next decade. Song ideas volleyed back in forth, but 2013 saw them hunker down and flesh out the vision for what would become their next offering. ACID KING returns to its throne with 2015’s full-length Middle Of Nowhere Center Of Everywhere.

ACID KING are doing things on their own terms, letting their personal ethos continue to drive the music…“We never played this music for popularity,” Lori S. exclaims. “There are no rules. We do everything how we want to. Acid King has always been driven by that.”

ACID KING shall independently release Middle Of Nowhere Center Of Everywhere on digital format, with the physical CD and vinyl formats to be released via Svart Records on 20 April, more details to be revealed in the coming months.