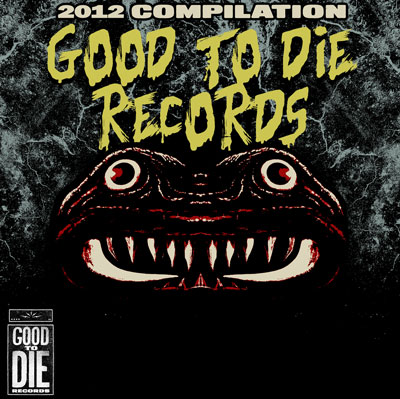 Have you been missing out on the mighty and powerful rock from the Northwest of the US that has been pumped out on the regular by Seattle’s Good To Die Records? Well, friends, you have no excuse now.

Good To Die is ready to get you caught up with its first digital-only compilation. Featuring tracks from all of the label’s releases to date, this handy little primer is rife with furious riffage, impassioned singing, and energy to spare. This free collection wraps together tracks from prog-metal dynamos Dog Shredder, the angular, furious punk outfit Deadkill, and the titans of sci-fi power rock Sandrider.

This compilation also boasts a pair of exclusives. You can grab your first taste of Portland’s queerest rockers Gaytheist, via “Condemn The Condemners,” a cheeky politically minded blast from the trio’s upcoming full-length Stealth Beats (out on August 21st).

And you get your first glimpse into Good To Die‘s most recent signing: the sludge punkers from Portland known simply as Rabbits. A sample of the band’s future Good To Die release, “Meth Valley 99” both pays homage to the influence of Sonic Youth and gives the trio a chance to show off their love of steaming noise and throat-shredding screaming.

All the goodness of Good To Die in one neat, tidy, and cost-free package? What the hell are you waiting for? Those eardrums of yours aren’t going to puncture themselves.