WOW. WOW. WOW. Yes, the White Hills were everything I hoped they would be and more – in short, they were/are A GLEAMING TITANIUM ROCKET HURTLING THROUGH TIME AND SPACE. But more of these arch-psychoblasters later. A wet Mancunian Monday. From Charles Street car park to the lovely Sandbar on Grosvenor Street, for a quick dark pint, huddled in the fine glassy rain on the brief walk down a student-swarmed Oxford Road. Then to the delight of The Deaf Institute, a beautiful chunk of high Mancunian Victoriana and my new favourite venue in the city. The stage is on the top floor, underneath a high domed roof, with a little bar to the right, crowned by multitudes of unconnected speakers. Staggered spectator seating is at the back of the room lending it the air of an old lecture theatre and the compact and square-ish layout feels instantly homely, along with the hideous yet attractive patterned wallpaper. Whilst I’m talking about the venue, I must pay credit to the graphics of Jamie Robinson, for he enriched the environment in the form of swirling and ever mutating psychedelic visuals that served to compliment the live feast perfectly. 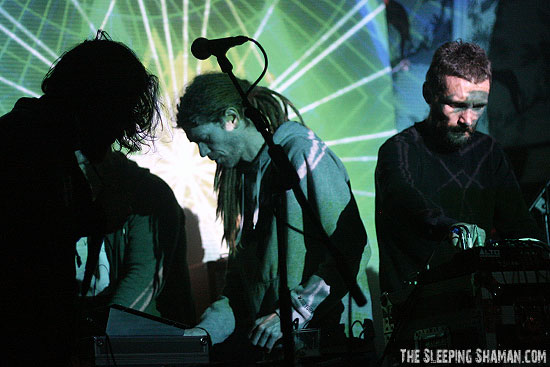 Only two bands tonight readers – good. I like to concentrate on a minimum, because I like to concentrate. Famed Islington Mill communitarians Gnod took to the stage at 8.30 for a half hour set of mantric electronic throb, accompanied by a hundred effects pedals linked to various metal boxes that they lurk over and twiddle with like Irish techno-druids living amongst Salford tower blox. This was a set similar to the one they performed supporting Author & Punisher earlier this year. In parts reminding me of a more powerful Throbbing Gristle (incidentally Gnod’s singer’s voice, who was absent from the stage tonight, has always for me evoked the sinister nasality of Genesis P. Orridge), Gnod bleeped, whooshed and shuddered like a giant metallic insect squatting on the surface of a twin earth 200 million light years away. There was a brief look of panic/puzzlement on central Gnodster Paddy Shine’s bearded face as he experienced some kind of problem with his gear toward the end of the set, but balance was restored after a while. I suppose that is the hazard of just relying on one thing, in this case bleeping boxy things that are electronic in nature (on a grander scale, apply this to cities of the industrial past that leaned solely on a narrow manufacturing focus like ship-building or pottery making. They would fold and buckle when said industry uprooted abroad for lower wages, e.g. Barrow-in-Furness, Liverpool, Bradford, Stoke-on-Trent etc). 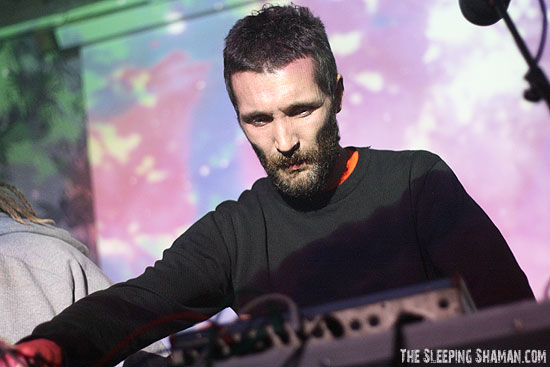 Whilst I prefer the Gnod I have seen of yore with their bass guitars and six-string guitars and drums (the Gnod of superb albums like ‘Science & Industry’) I concede that a band often must experiment in order for its members to feel fresh and vital. Stagnation is the enemy of creativity. These forays into electronic repetition are justifiably important for Gnod, but I do have to ask myself “is it as good as the stuff they were playing at Roadburn and Supersonic a couple of years ago?” Mmmmmm. By that I have to quantify what I mean by ‘good’, and that can be notoriously difficult (Robert M. Pirsig famously attempted an exploration of ‘quality’ in ‘Zen and the Art of Motorcycle Maintenance’ if you’re interested by the way. The last half of the book really drags though). Perhaps I mean ‘what I like best’. But also, I feel I can gauge the reaction of the crowd by looking around and observing their behaviour, and I have noticed that the last two electronic sets I have seen Gnod play have not quite held the gaze and attention of the spectator as of previous guitar-based excursions. Nevertheless, this cherished collective of creative minds are an unmissable fixture in the Manchester music calendar and I applaud all their meanderings. One day, when they have split up and moved on, they will be sorely missed as the uber-cool innovators of urban-psychedelia that they are. 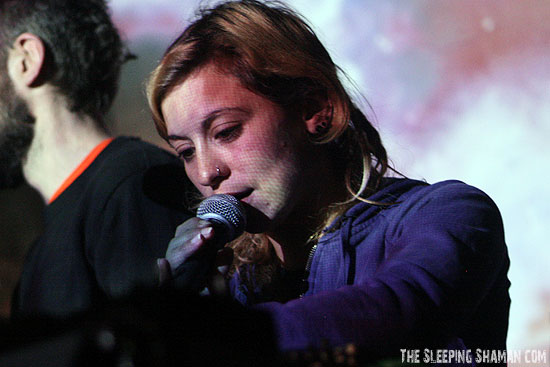 Having missed White Hills at Supersonic a couple of years ago because I had to get the last Sunday train back to Macclesfield I have been determined to tick these three off in my little Eye-Spy book of kool bands for quite some time. Even before they take to the stage they immediately look like stars – immaculately dressed like mutant glam-rockers from a parallel dimension, three cosmic New Yorkers that have made neo-psychedelic ROCK (and I mean ROCK in capitals) their own. Lead singer and red-hot guitarist Dave W. is a kind of pocket-sized psilocybinated Alice Cooper with the best shirts in the Western World and let’s just be blunt about bass player and vocalist Ego Sensation. She is gorgeous. She looks so good. She throws her peroxide head back when she plays and snarls like a huge kitten. She manages to make other people in bands look like old bags of gravel. Throw in one of the best drummers in the States and you have a recipe for immediate spontaneous combustion of the cerebral cortex. Maybe White Hills are too powerful and metalized for the Liverpool Psychfest crowd but in reality they would go down a raging storm if they did grace the stage at The Camp & Furnace next year, or any year. 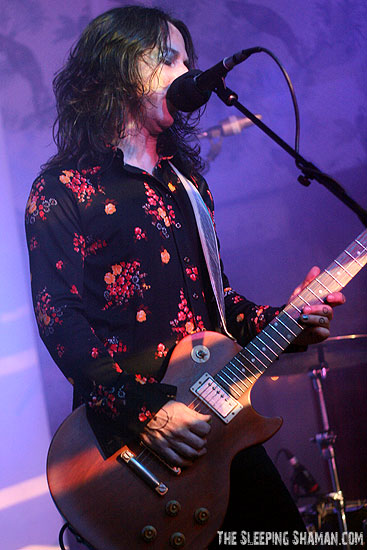 On a stage, plugged in to the mains, White Hills are SHEER POWER. I think that is the most succinct way to describe their main talent. As I suspected from previous conversations with those who have witnessed them live, they literally launch themselves into head-orbit in a truly awe-inspiring flourish of three essential and patently obvious ingredients: 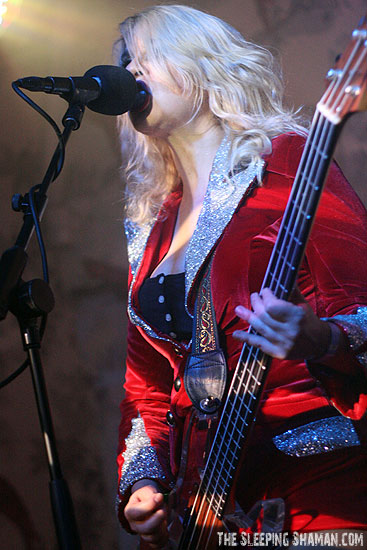 Top this interstellar triumvirate off with stunning aesthetic sense both sonically and visually and you have Brooklyn’s (via San Francisco) White Hills – a real psychedelic band. I reviewed their last album (‘So You Are…So You’ll Be’) here at T’Shaman a few months back and you may recall that although I loved it lots, I felt let down by a bizarrely subdued recording that didn’t do the fabulous songs justice. Yet I knew that live, White Hills would completely do their last platter perfect justice and indeed they did. One of the album highlights is ‘In My Room’ and after the head-busting opening number they tore into this rock and roll belter and exposed it as a true powerchording cosmic classic. The sub-Stooges primate riff melded with a kind of early Hawkwind freak-out crossed with the angular future-punk of Chrome makes for one beautiful experience – White Hills at their cosmique best methinks. Close behind are the ‘So You Are…’ album’s title track and ‘Forever In Space (Enlightened)’ – both were thrust out tonight, taking out everyone’s seething brains in a ricochet of steel-plated prog-punk. That’s why the lacking-bollocks recording was such a damn shame. Another live album please, oh people of the Hills. 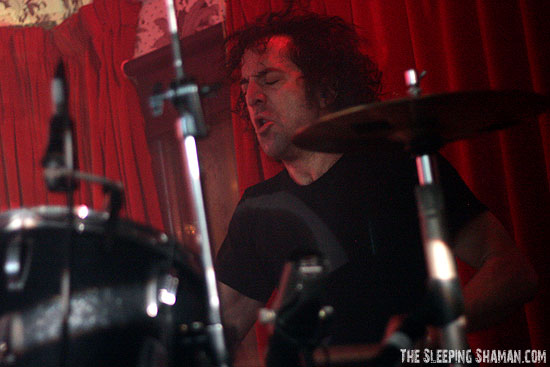 White Hills viciously steamrollered through juicy newbies and older gems like ‘Pads of Light’ and ‘Under Skin Or By Name’ for about seventy minutes, and then just had to come on again within minutes of going off for two more numbers. I rarely see bands do encores these days and mainly because the audience are happy to throw the towel in and bugger off, but not when a band is this good. Every single thing they played, whether beat or chord or note, was pristine. Immaculate. They make so much sense as a concept live because you can see/hear the root of their whole lovely ethos – to take the brain-bombing ideas of insurrectionary shaman like Philip K. Dick and William Burroughs and the blood-soaked visceral excitement of hearing and feeling(prepare for a long list of classics)‘I Wanna Be Your Dog’, ‘Overkill’, ‘Silver Machine’, ‘Brainstorm’, ‘Baby’s On Fire’, ‘Highway Star’, ‘Jean Genie’, Skunk (Sonicly Speaking)’ and yes a hundred other greasy gut-stomping space-thug orgasmatronic thunderbusters, and to inject them with the steady pulsebeat of alienated Germanic genius in the timeless meter of Neu! And Harmonia. What you have, ladies and gentlemen, is a sonically perfect hypodermic syringe straight into your writhing reptile brain. Anyway, you can probably gather that I liked seeing White Hills. Correct. And I want to see them again. Many times before I die. That’s it. I love them. Finished. 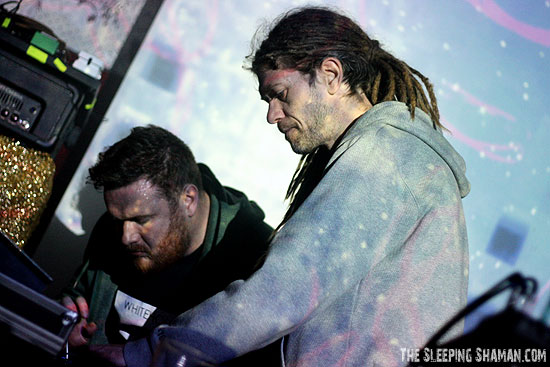 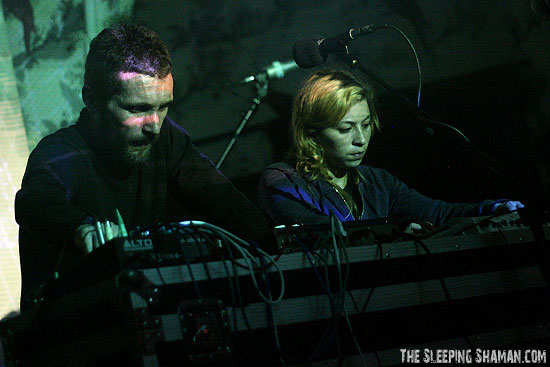 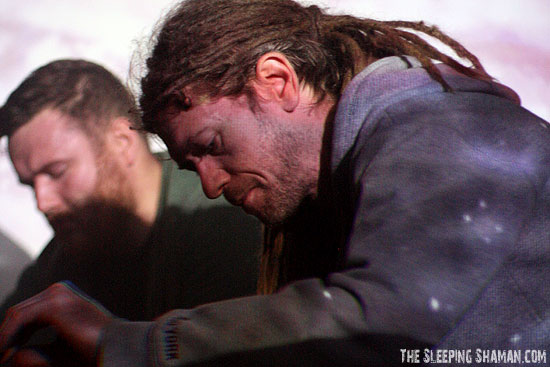 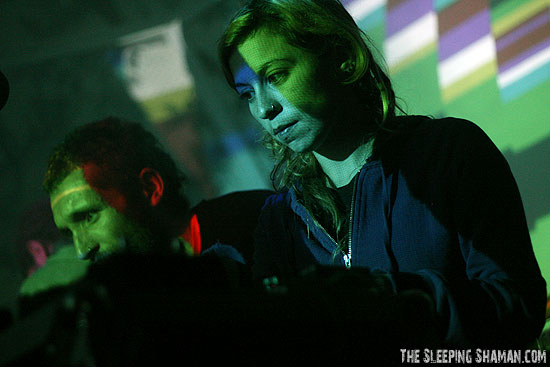 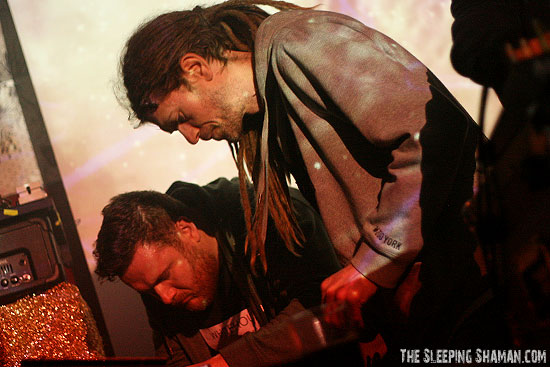 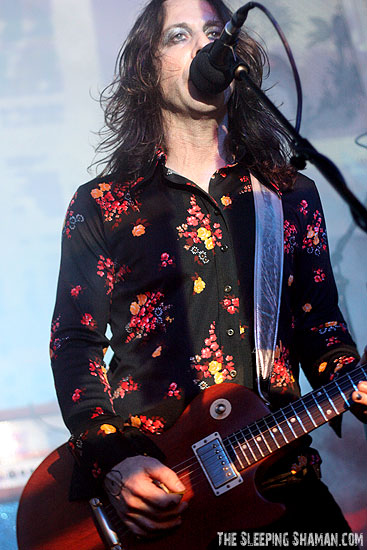 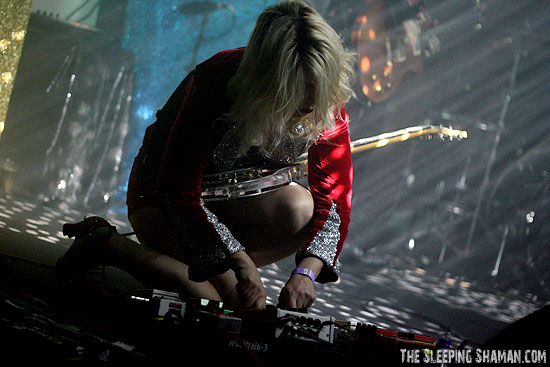 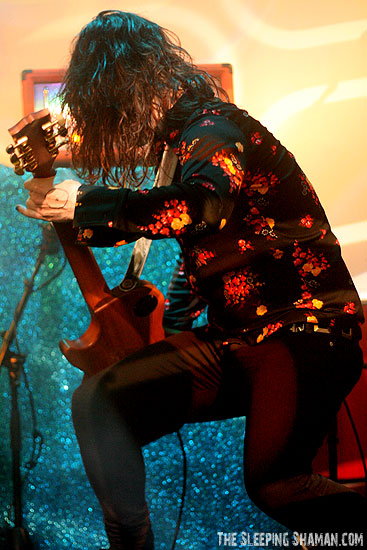 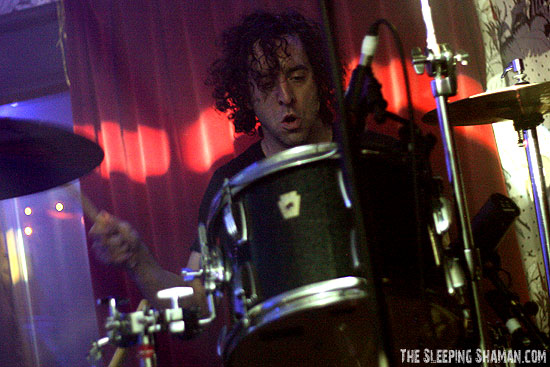 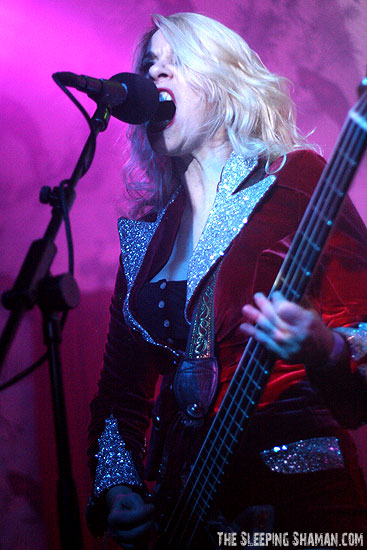 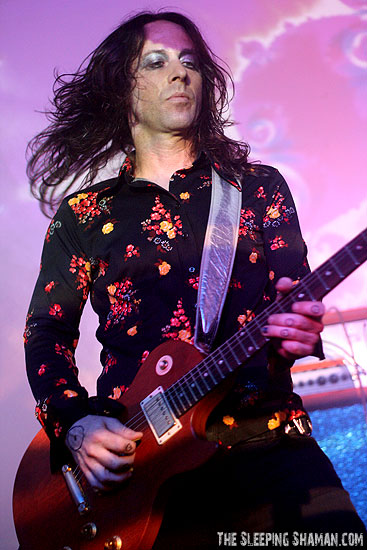 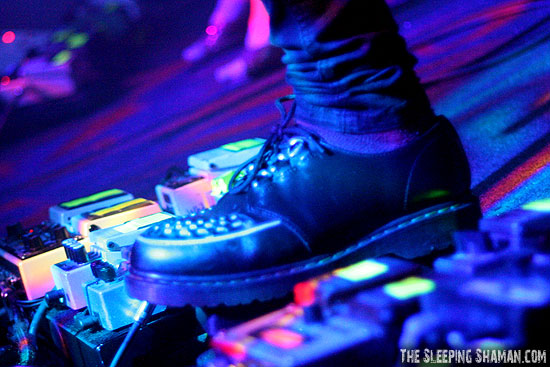 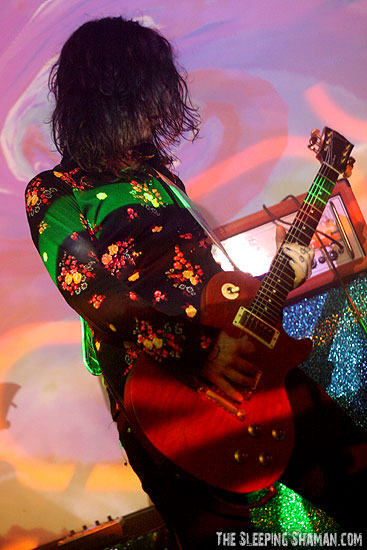 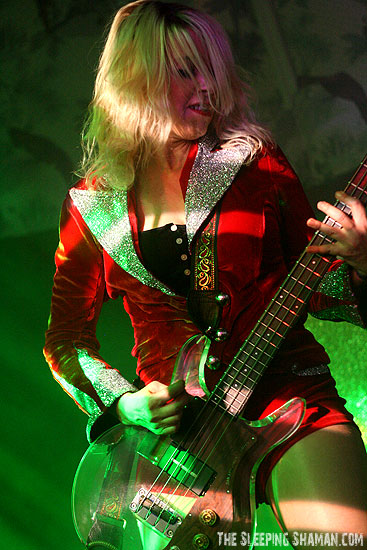 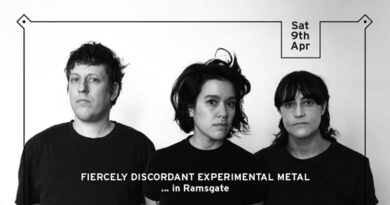