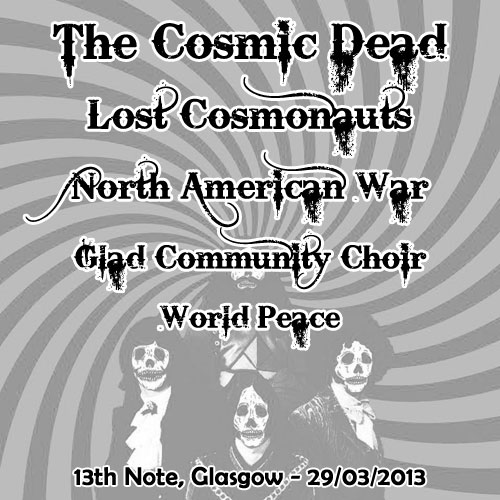 Bless their little cotton socks, The Cosmic Dead are all grown up. It seems that just yesterday that their self-titled cassette was reminding everyone with an open mind and a spare day of what a really good jam sounded like, and now it’s finally getting a tasty vinyl re-release, there are four new releases on the way (including a split 10” with Gnod and a vinyl pressing of last year’s meandering masterpiece The Exalted King) and the lads are about to embark on their first European tour, by way of a closing slot at Roadburn. It’s fair to say that they’re all a bit chuffed, in other words, and expectations are running appropriately high.

With doors running late, the constant stream of curious punters asking “Are they still soundchecking?” is a good sign of how packed the room is when openers World Peace are setting up. Whilst not the most well-known of Glasgow bands, their pedigree is plenty prestigious, with bassist/vocalist Sinead formerly a member of killer noiseniks Divorce, though their brash and scattered noise rock has an abundance of personality all of its own. The scratchy riffs and sparse, Soviet percussion have a peculiarly off-kilter quality, like a merry-go-round tilting off axis, and their short set gives a heady punch that takes you to a Sonic Youth-soundtracked wonderland.

The first of tonight’s head-scratching contributions is that of the Glad Community Choir and their interpretations of the songs of late poet, busker and Viking Moondog. Cut down in number from 80-ish members to a more manageable 20 or so, they give an elated performance that effectively captures the man’s magic and charm, an ensemble of gifted voices trying their hands at something truly unique. Almost imperceptibly, the voices fade in and out, dispel and coagulate, becoming auditory punctuation and, as the Dead’s James T McKay contributes a haunting background swell of drone, it gradually takes on a darker shade before rising for one last, joyous swell. It’s hard not to feel a little privileged after that.

Before the hippy swoon can kick in, North American War ramp the pace up with their Jesus Lizard-esque air of understated malice. They’re one of the rare bands to be heavy without raising voices or volume, the simple deranged nature of their music and the sense of surrealism that goes with it proving daunting enough. There are nods to the melodic angularism of Don Caballero lurking in their bewildering riffs, but they occasionally let rip with moments of tranquil beauty that pose just as many questions.

If it was busy before, now it’s crammed like pilchards in a matchbox, a slight dilemma for Lost Cosmonauts’ mix of noise, Soviet kitsch, audiovisual presentation and performance art. Atop a mesmerising wash of static, solar drones and samplings of Soviet cosmonauts, a man in a boiler suit and plastic welder’s mask mills through the crowd, bouncing and shunting his way through the throng, roaming corridors and occasionally just staring at whoever takes his fancy. It’s undoubtedly peculiar but given the weird charm in seeing something so surreal accomplished with a perverse tongue-in-cheek conviction, it’s also a little bit genius.

After a long wait, the time has come and people are still paying their way as in as the Dead are blasting off into wherever it is they go when the riff takes them. Loud enough to start, and stop, a war, their freewheeling take on Kraut is completely hypnotic but underpinned with an unmatched degree of skill. They specialise in the art of escalation, letting drones and mantric basslines swell to fill the room and imperceptibly shift them until all hell is breaking loose and you’ve no idea how it got to that level without you noticing. Chief instigator is undoubtedly McKay, a hairy beast that thrashes and wails like Kawabata Makoto weaned on Buckfast, mangling all six strings as if heralding the collision of heaven and hell and providing an uplifting counterpart to Omar Aborida’s deliriously monastic chanting.

A deep, dubby rumble signifies the genesis of Djamba (the D is silent) and the inexplicable happens – dancing, as far as the eye can see. Punks, hipsters, friends and family – everyone is getting down to the Dead’s ethereal reggae, swept up in the sparse, lilting melodies and Aborida’s unstoppable groove, while broad swooshes of synth fill the room with the indelible aura of a long-forgotten commune, the scents of incense and hashish faintly lingering through the years. While a far cry from their earlier freakout days, it seems to capture what they’ve always been about, uniting a room with the power of a single riff and pulling and reshaping it in every way their hairy minds see fit.

By The Cosmic Dead’s standards, tonight is almost a taster. Other obligations see them wrapping things up in just shy of an hour, but even this is a sign of just how far they’ve come in these few years. They can still work the same magic, audial snakecharmers that they are, but they no longer need 2 hours to do so. They’ve streamlined the process and blessed us with songs, albeit ones that still let them meander and swirl into the sky or down to Hades, depending on how they’ve been feeling that day. They don’t do linear, this lot, and Europe’s about to see just how lucky they are for that. 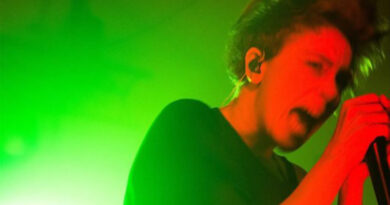 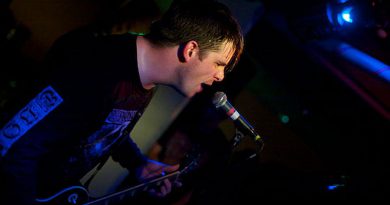 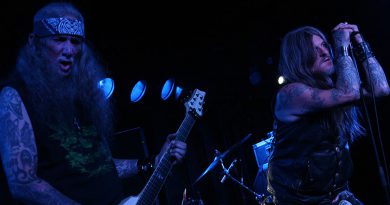