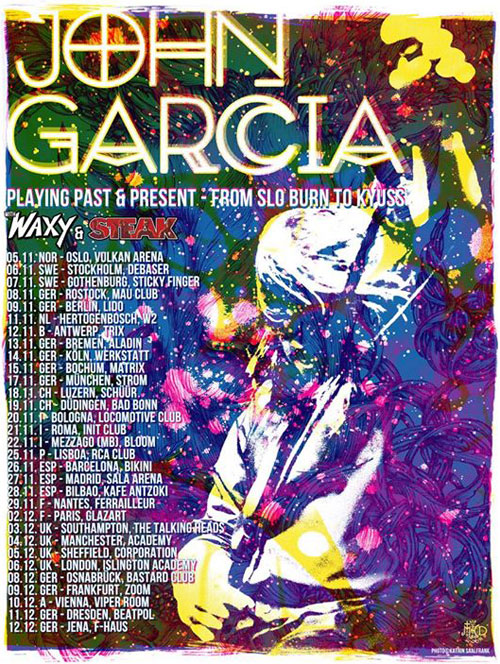 Having reviewed the debut solo album and followed that up with an interview back in the summer it was finally time to make the long trek from Devon to the capital in what is essentially the concluding part of my John Garcia trilogy.

Having been impressed by both the music and the man himself, it would still be a new experience to see him in this environment; I have seen Kyuss Lives! twice and seen the original incarnation on YouTube so I know Garcia can sing well in the flesh, but here he stands on his own, not hiding behind a band name, so it would be interesting to see how well he would shoulder this burden.

But first up in the still filling 02 Academy was Dutch Stoner collective Komatsu. Formed in Eindhoven by various members of acclaimed local bands, they have garnered favourable reviews of their 2013 debut album Manu ArmaTa. Having had Garcia himself join them on stage and declare himself a fan, the band find themselves opening for him on this tour.

Pedaling a solid, muscular brand of stoner rock that are big on catchy riffs and gruff vocals that reminds the listener of Karma To Burn, or the more straight ahead moments of Down. They are visually energetic (particularly Martijn Mansvelders on bass) and start warming up the crowd nicely.

Just when you think you had them pegged, without warning they drop down a gear and get all psychedelic on our asses in a sort of droning, early Monster Magnet kind of way. It is a slight departure if you don’t know it is coming as previously they had a hard Motorhead kind of rock ‘n’ roll vibe and then set engines for the heart of the sun. Personally I preferred the first take, but there is no denying the positive reception they got.

Next up are local boys done good, Steak. Having become one of the leading lights in the UK Desert/Stoner Rock scene on the back of two critically acclaimed EP’s, they have recently released their full length debut Slab City, a busting 48 minutes worth of meaty rock that shares a label (Napalm Records) and producer (Harper Hug) with the big man and this is reflected in the highlight of their set when Garcia joins them on stage for the track he guests on (Pisser). To say front man Kippa has modeled himself on John is to point out the obvious, even if his voice is rougher and there is more interaction with the crowd. At one point he gets the pit moving by diving into the audience and doing the song elbow to elbow with the punters.

The band rock along calling to mind the likes of Roadsaw, Truckfighters, Unida and Hermano – delivering punchy desert laced rock ‘n’ roll that recalls several of the former Kyuss front man’s previous incarnations which has to be met with a wry smile considering they are from round these parts. However there is no denying that they know how to work a crowd and their set is witnessed by a greatly swelled audience and each track finishes to rapturous applause.

And so to the man himself…

Having surrounded himself with the backbone of the album recording band Ehren Groban (guitars), Mike Pygmie (bass) and Greg Saenz (drums), John Garcia allows the band to open proceedings with Kyuss instrumental Caterpillar March before opening with the thunderous cover of Black Mastiff’s Rolling Stoned. The band, some of whom also backed him in Hermano, crunch with a more metallic edge than on record and definitely slam with an energy that is infectious and then there is the man who everyone is here to see. Never the most vocal, Garcia stands there with a huge smile on his face watching the ecstatic reception and then unleashes that voice. Having heard him sound rejuvenated on his self titled record, he rips into the material live and sounds as good as you would ever hope, in fact he sounds amazing.

Choosing songs for the set list that would please everyone is an impossible to task given the scope of the man’s past, but this is also a tour very much about the present and we get treated to the majority of the solo album including lead single My Mind, The Blvd, Argleben, Flower and the huge sounding Danko Jones penned 5000 Miles which slams and grooves in one of the biggest tunes of the night. As if this wasn’t good enough, in the encore we get treated to Slo Burn’s July – I wanted Pilot The Dune, but at this point it is churlish to complain about which slice of cool we are treated to.

Of course there is no escaping the legacy that John Garcia has behind him and the set is interspersed with scene stealing classics from when he fronted a band called Kyuss. Tonight we get One Inch Man, El Rodeo (prompting the first real pit of the night), Green Machine and closing with a towering version of Whitewater which finishes with the house lights up so that John and the audience can connect.

There is no denying the man has a Godly voice; he may not crack jokes or try to get the crowd fired up by playing cheerleader, but in reality there is no need for such cheap gimmicks. His band are solid and tight and witnessed by jamming Kyuss’ 800and extending it when Garcia doesn’t make a timely reappearance for the encore and this back drop allows him to simply possess the room with his emotive singing.

Having never gotten the chance to see him ‘back in the day’ this was hands down the best I have seen him and certainly the most relaxed and happy, making the trek from the South West more than worth it. 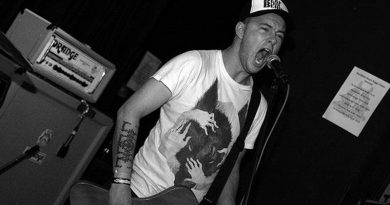 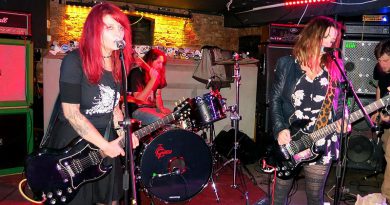